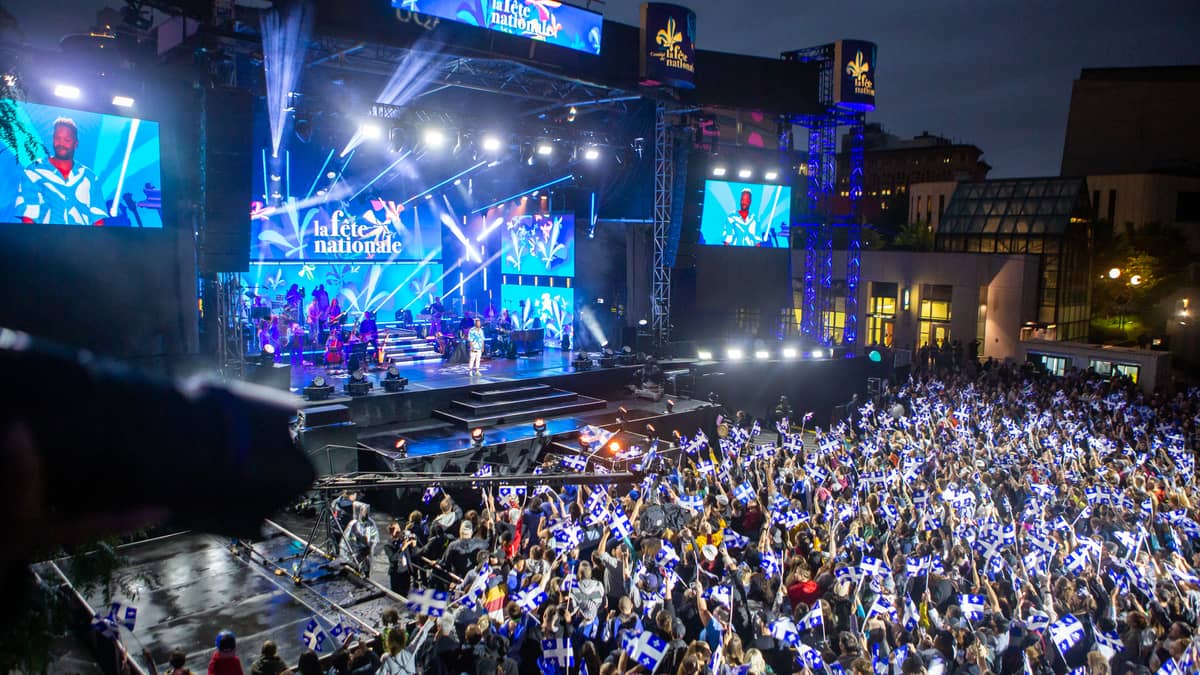 After a notable absence in the last two years, the Quartier des Spectacles has finally regained its festive air on Thursday, on the occasion of Saint-Jean-Baptiste Day, celebrated in grand style, but above all in front of a large and enthusiastic crowd.

It was with clear skies and mild weather that the Montrealers were finally able to celebrate the long-awaited return of the National Day celebrations in the square of the Place des festivals. Hand decorated with lilies, the families and friends who came to watch the big party showed euphoria throughout the evening, singing and dancing to the rhythm of the “festive” melodies, covers and classics that had been played since the 1930s. musicians and the dozen singers who took turns on the main stage.

Conducted by Pierre-Yves Lord, the evening entitled “J’aime ma langue” gave way to sometimes touching moments, in particular during the revival of “Tu m’aimes-tu” by Ariane Roy and Les Louanges, but above all festive and dancing moments, so much so that the crowd emanated a contagious electricity and feverishness.

The festivities kicked off at 9pm in a potpourri of Quebec classics, revisited by the artists who took part in the Festival, joining their voices on Claude L’éveillée’s “L’étoile d’Amérique”.

Roxanne Bruneau then took the stage to sing her song “À ma way”. She obviously returned later to sing her hits of her “Love me again” and “Des p’tits bouts de toi” as well as the cover of “Provocante”, by Marjo.

An essential symbol of Saint-Jean and Quebec rap, the Loco Locass group, wearing their signature lily hat, took the surprise stage to play “Le Mémoire” and “Le But”, where they gave a happy nod to the blond demon Guy Lafleur.

FouKi, who replaced with Sarhamée a rap version “Gens du pays” by Gilles Vigneault, notably played “Copilote” with his good friend Jay Scott, as well as “Ciel” with Alicia Moffet and “Gayé” – where everyone is squat down to get up better – towards the end of the show.

Ariane Roy, who was a hit at Francos last Saturday, sang Marjo’s “As long as there are children” and “Ta main”, while Alicia Moffet revisited several songs by others, including the hit popularized by the iconic duo. by Garou and Céline Dion “Sous le vent” and “Pour que tu m’aimes encore”.

Accompanied by two dancers, Sarahmée made the crowd dance with “The heart has its reasons”, hiding a “We will always love you Karim” in one of the last lines, to underline the memory of her older brother. Les Louanges, Patrice Michaud, Michel Pagliaro, Kathia Rock, who brought some Maliotenam to Montreal, and Jay Scott also walked the stage on the main stage of Place des Festivals on Thursday. All together, including PY Lord, also joined their voices, at the end of the evening, on “L’Amour” by Karim Ouellet.

Towards the end of the exhibition, Pascale Montpetit, Catherine Proulx-Lemay and Patrice Michaud read an excerpt from the text “To the Heirs of the Year 2000” by René Lesvesque, who would have celebrated his 100th birthday this year. The text written in 1980, still relevant in 2022, was followed by “Hymne à amaour”, written by Luc Plamondon and Christian Saint Roch, this time interpreted by singer Marie-Josée Lord.

The National Day show will be broadcast on ICI Radio-Canada Télé and TVA on 24 June at 8 pm and simultaneously on the Cogeco Media music stations, 96.9 CKOI, the 5 stations Rythme, CIME and Planète. .