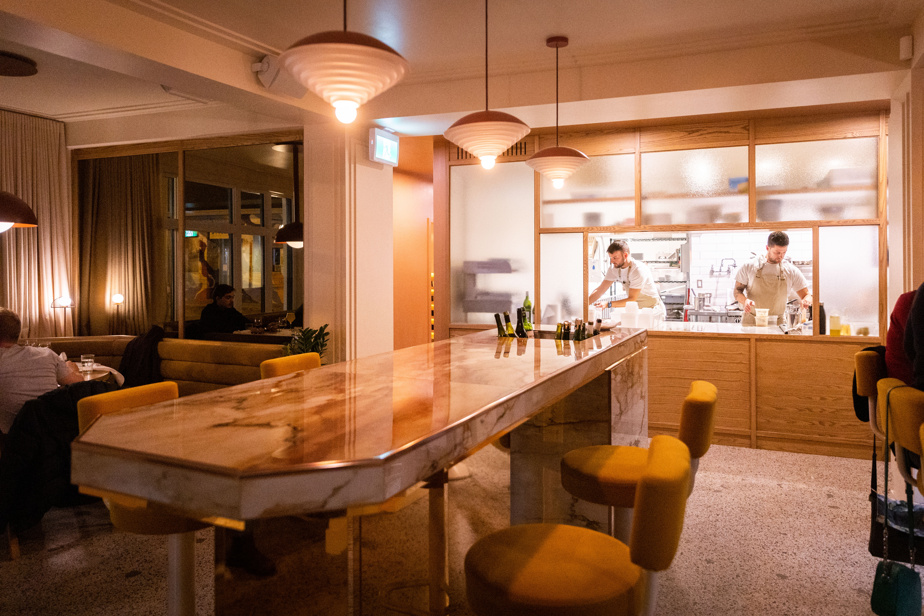 It is the up-and-coming neighborhood of Saint-Sauveur, in the lower city of Quebec, that the Melba restaurant team has chosen to set up their neighborhoods. Chef Guillaume St-Pierre, who has joined forces in this new venture with the chef duo Charles Provencher-Proulx and Alexandra Roy, remains on familiar ground: his renowned establishment Battuto (elected Restaurant of the Year at the Lauriers de la Gastronomie this year) is installed not far away, in Saint-Roch, an adjacent district.

In this graceful environment with clean lines designed by APPAREIL Architecture, the chef and his acolytes offer their interpretation of modern French cuisine. The two chefs know each other, having worked in restaurants in Paris and Chantilly before settling back in Quebec. The trio met at the Auberge Saint-Antoine restaurant years ago, so when Charles Provencher-Proulx and Alexandra Roy had the desire to open their own establishment, the idea of ​​collaborating with their friend came naturally.

“We like the French classics, but we present them in a contemporary way, sometimes adding a local element,” summarizes Alexandra Roy. “You can start with a classic sauce that comes from a lesser-known region, such as ravigote sauce, but made with Jerusalem artichokes, which are in season, and add a Comté emulsion on top,” gives the example of Guillaume St Pierre.

The short menu, modulated according to the seasons and inspirations, offers elegant and gourmet appetizers, such as the delicious dauphine potatoes with their gorria chicken and pepper sauce, or an egg remoulade with Nordic prawns and seaweed. There is also a section of sharing plates, some more refined, some more comforting, as well as refined desserts. The aesthetics are refined, the flavors are well crafted, the techniques are correctly executed: without a doubt, we are dealing with professionals here.

He is also another professional who completes the team. Seasoned sommelier Marc Lamarre, who has officiated at Le Clocher Penché for 10 years, joined the team a few months before the opening, which has been repeatedly delayed due to the pandemic. “I’m pursuing the style that I’ve developed for almost 20 years, between classics, discoveries and rarities”, sums up the man who is happy to be able to count on a team of professionals in the dining room.

Which is probably no stranger to the fact that Melba has opted, as we have seen more and more since the pandemic, for a Monday-Friday, evening schedule. And like in Battuto, reservations for the following month open a few days in advance, like November 25th for the month of December. Hurry if you want your seat!