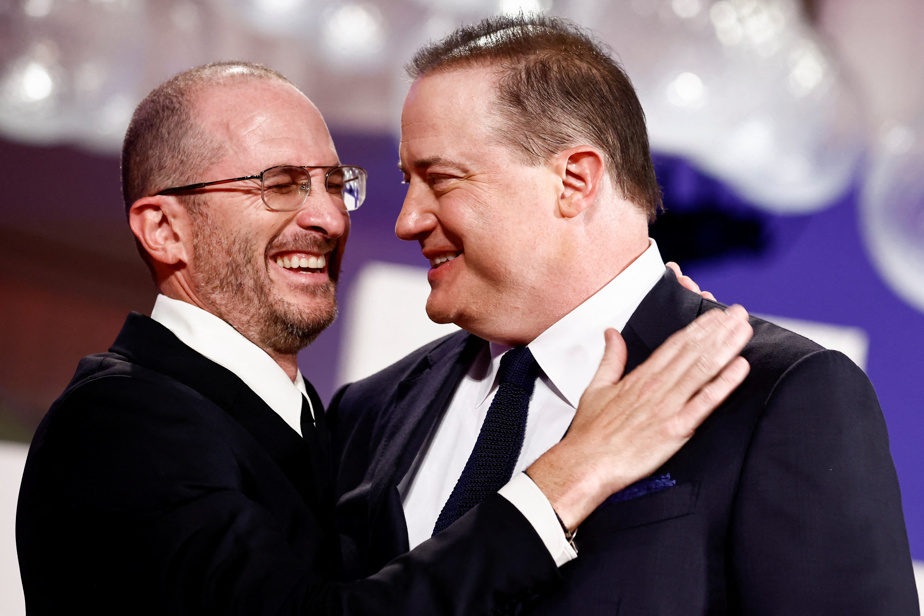 Bringing Samuel D. Hunter’s play titled The whale, Darren Aronofsky has brilliantly resumed his transposition bet. Rumors about the awards already revolve around Brendan Fraser’s touching performance, but the actor prefers to take things one day at a time …

So far, the competition is turning out to be really good and no one could guess what will lead the jury chaired by Julianne Moore to determine the winners next Saturday. But the fact is that on a simple skin level, no candidate for the Golden Lion has aroused as much emotion as The whale. A regular at the exhibition, Leone d’Oro in 2008 thanks to The wrestler, Darren Aronofsky could very well repeat the feat this year. His new film is a great success.

In addition to the interpretations of the actors, including the exceptional one by Brendan Fraser (“Give him the Oscar!”, We could read on social networks), this is above all the way Aronofsky had a feat, assisted by his accomplice for throughout his life Matthew Libatique in the cinematographic direction, to make the film object of an eminently theatrical play at the beginning. Although the theatrical origin remains evident in the dramatic construction of the script, and although there is only one setting, The whale it’s a real cinematic proposition.

First there is the frame. Square or square. How to delimit the confined space in which the protagonist must evolve, without even being able to leave the house. This frame also evokes the sensation of suffocation that must feel a man suffering from morbid obesity, whose mobility is reduced, prisoner of an excessively heavy body.

English teacher and literary enthusiast (one of his favorite stories is Moby Dick, to which the title of the film refers), Charlie (Fraser) virtually gives his lessons to students who never see him. In his life, only four people are part of his entourage: his best friend, nurse and also caregiver (Hong Chau), a young visiting evangelist (Ty Simpkins), his ex-wife (Samantha Morton) and most importantly, Ellie , his 17-year-old daughter (Sadie Sink), whom he hasn’t seen in several years. The latter has resumed contacts to substantially settle the accounts.

The final act of the film, during which the story reaches an unusual emotional power, takes place in the presence of Charlie and Ellie. At the screening for the press, there were no dry eyes at the exit …

During a press conference held on Sunday, Darren Aronofsky explained that he wanted to wear The whale on screen while reading a review of the show, published in New York Times. “However, I had to wait 10 years before carrying out the project. Especially since it was difficult to find the actor who could play Charlie. I thought of everyone, actors of all kinds, big stars, but the spark never happened. Then, a few years ago, I came across the trailer for a Brazilian indie film in which Brendan starred and it turned on right away. I organized a reading between Brendan and Sadie and the thrills started as soon as these two started playing together. ”

The director also indicates that in this period of cynicism, Charlie’s worldview, imbued with hope and love, becomes essential.

“This is the most important message to convey in today’s world,” adds the director. Everyone is becoming cynical and losing hope. This is exactly what we don’t need right now. Rather, we need to tell ourselves that, after all, we need to take care of each other. ”

Brendan Fraser, whose speeches were repeatedly applauded at the press conference, makes no career plans for what this role could bring him in terms of recognition.

“I saw it as a great opportunity to enter another man’s physique and the inner history that he brings with him. I don’t know any actor among my peers who wouldn’t want to work with Darren. ”

As for the rumors of awards already starting to circulate around him, the actor, who was a huge Hollywood star at the time The Mummy and of George of the junglehe wants to put things in perspective.

“My crystal ball isn’t working and I want to live in the moment. My ambition is to play as many characters as possible. Above all, I can’t wait to see if this film will leave as strong an impression on people as it did on me. ”