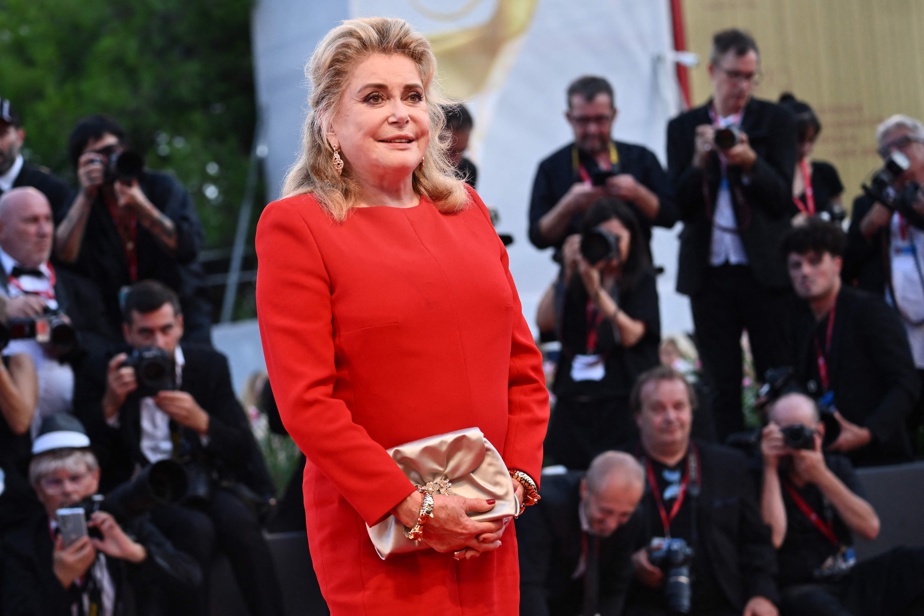 The opening night of 79And The Venice Film Festival was characterized by the awarding of the Honorary Golden Lion to Catherine Deneuve for her entire career. In front of the international press, the one who refuses the status of an icon she presented herself as she is, true to her nature. As for White noisethe opening film, let’s say it’s all chaos …

It was very nice to see her in such good shape. Catherine Deneuve arrived at the press conference that preceded the awarding of the Honorary Golden Lion by answering journalists’ questions as she always did: without saying too much, sometimes winking, ready to deconstruct all the mythology that has surrounded for many years. Which, ironically, only solidifies it.

Particularly venerated by Italians, with whom she has had a close relationship for a long time (she also answered several questions in Dante’s language), Catherine Deneuve insists on staying in the here and now, always very active, driven by an unusual passion for cinema, both as an actress and as a spectator.

“It’s always a great pleasure to go see a movie on the big screen, in a room, with people I don’t know. ”

She says she feels a shock to see pictures from a retrospective summarizing her career when such a tribute is paid to her.

“It is a bit difficult to look at what we have done, as if everything has been designed for the future. Because it never happens like that. There is a lot of luck, good decisions, sometimes not so good. After so many years, we go through the list and hopefully we’ve made the best choices most of the time. It is not a refusal to look to the past, but I prefer the reality of the present. ”

But as this is an award that rewards an entire career, Catherine Deneuve was asked who the directors who define her best are. The actress has identified three: Jacques Demy (Umbrellas of Cherbourg, The ladies of Rochefort, Donkey skin), Francois Truffaut (The Mississippi Siren, The last meter) and André Téchiné, with whom he regularly collaborates (Hotel of the Americas, The crime scene). She believes it is even easier for an actress her age – 78 – to find good roles in Europe.

“In America it is starting to change at this level, but it is still in Europe that older actresses can practice their profession. ”

She rejects the status of icon, as well as that of sex symbol, which had been attributed to her in another era.

“I’ve never seen myself as a sex symbol because I’ve never been there. I haven’t even had myself photographed with that in mind. But it’s true that when you mature it becomes a challenge to offer something other than the image that people may have. . ”

Noah Baumbach, whose previous film, Marriage story, was also launched at the Mostra, he reread a book he had read as a teenager shortly before the pandemic. In what she found White noisethe novel that Don DeLillo published in 1985 (Background noise in French), it was so in tune with our times that the director couldn’t resist bringing it to the screen. The project was ambitious, but the result, alas, is half fig, half grape.


While he had dragged us into the harsh reality of a relationship that is dying out with cruel accents of truth in the best Marriage storyNoah Baumbach takes a completely different direction this time by portraying a family whose life will be constantly disturbed by strange phenomena.

Adam Driver, always excellent, this time slips into the skin of Jack, an academic specializing in the history of Nazism and Adolf Hitler. In front of him, or rather in parallel, a colleague fascinated by the life of Elvis Presley. At home, Jack’s wife (Greta Gerwig) treats her life-sore with a drug that no one knows about, and it’s the day that a truck accident (this film is a lot about the film’s spectacular crash function) causes. such a toxic cloud effect in the region that this entire Ohio city needs to be evacuated urgently. With the ensuing chaos.

It is true that the themes addressed by Don DeLillo in his novel, set in the America of a few decades ago, are still as relevant as ever. But after a more “realistic” first part, the story then falls almost into the fantastic, without really drawing any coherence from it. Of course, the quality of the dialogue remains intact and the effects of black humor are quite successful, but White noise will not have really convinced us.

We will have the opportunity to come back to this, as Noah Baumbach’s film, in the running for the Golden Lion, will be released on the Netflix platform on December 30, preceded by a theatrical release a month earlier.