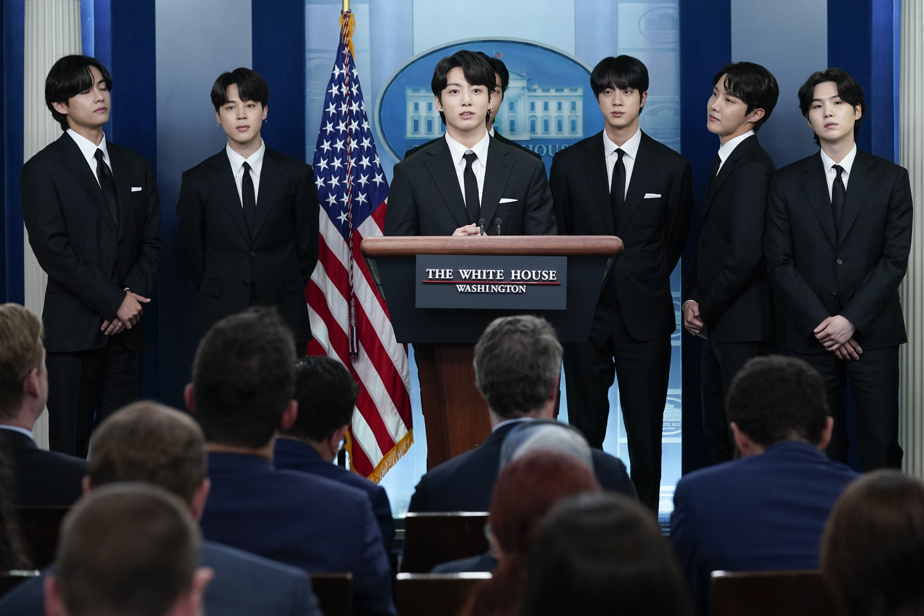 (Seoul) Calling themselves “tired,” K-pop group BTS has announced a “hiatus” for each of its seven young men to focus on their journey after this billion-dollar boy band’s meteoric career for the South Korean economy.

Their HYBE label, which went public on Wednesday morning the day after this news, sought to mitigate the information by assuring AFP that the seven guys would continue to work together.

The sudden announcement of this “hiatus”, which had the effect of a bomb on social networks, was launched on Tuesday during a dinner broadcast on the Internet on the occasion of the ninth anniversary of the group of seven twenty-year-old artists.

In a very relaxed and informal style, the seven in jeans and a T-shirt talk around a beautiful wooden table, with bottles of wine and beer, surrounded by purple and blue balloons.

One of them, RM, 27, explains with tears in his eyes and a lump in his throat that after several nominations for the Grammy Awards – the awards of the American music industry – “they no longer know which band they make up” exactly. , adding that some members are “tired”.

“I always thought that BTS were different from other bands. […] but the problem with K-pop and the whole “star system” is that you don’t have time to mature, ”continues the young man to millions of fans and the world of the music industry.

BTS is seen as a pump to generate billions of dollars in spin-offs for the South Korean economy, and in 2021 they had a record revenue of more than $ 1 billion, thanks to online content and album sales.

But according to RM, the group “needs to constantly produce music and do something”.

“In ten years I have changed and I need to think and have time for myself”, the artist blows.

One of his partners, Suga, later announces that BTS “will now take a break”.

“They will launch individual and team projects in parallel,” assured AFP of the HYBE label, whose share dropped 27% on Wednesday morning in Seoul.

Another member, Jimin, 26, adds that the septet was “slowly trying to figure out” what was happening to them and “thinking about the memory everyone wanted to leave for their fans.”

Jimin, who spoke like his comrades in Korean and whose remarks were subtitled in English in the video, also acknowledges that BTS “is having a hard time, (that he) is looking for (his) identity, a long and grueling one.” .

At the end of the dinner, the “pop icons of 21And century ”according to their Big Hit label – hit writers Dynamite And Butter – crush a few tears and express their gratitude to their fans, grouped under the banner of “army”.

“It’s not like we’re running out of the group,” Suga assured, “we’re just living apart for a while.”

And Jungkook, 24, to promise that “one day we will come back even more mature than we are today”, asking for the “blessing” of their fans.

They showed understanding by posting tens of thousands of comments under the YouTube video.

“I really like the way they are honest,” said one. “They are people like us. They can be tired and exhausted. They deserve to rest and enjoy what they love to do, ”said another.

“It seems what they meant is that BTS will continue their side group activities (like on YouTube) while pursuing a solo career,” he told AFP, without leaving any new albums as a group.

“It would have been more appropriate if the label had released a statement first clearly detailing what it meant,” said Lee, adding that it was a bad decision to ask the band to announce this news, which hasn’t failed to turn fans around.

BTS, who released an anthology album on Monday (trial), had already announced “breaks” in 2019 and 2021. But this time the group “needs a change” and wants to “start a new chapter”, insists J-Hope, another member of the septet.

South Korean artists were invited by President Biden to the White House on May 31 to denounce racism against Asians in the United States.

The group had already been invited twice to speak at the UN, in 2018 and 2021, on climate change and the COVID-19 pandemic.