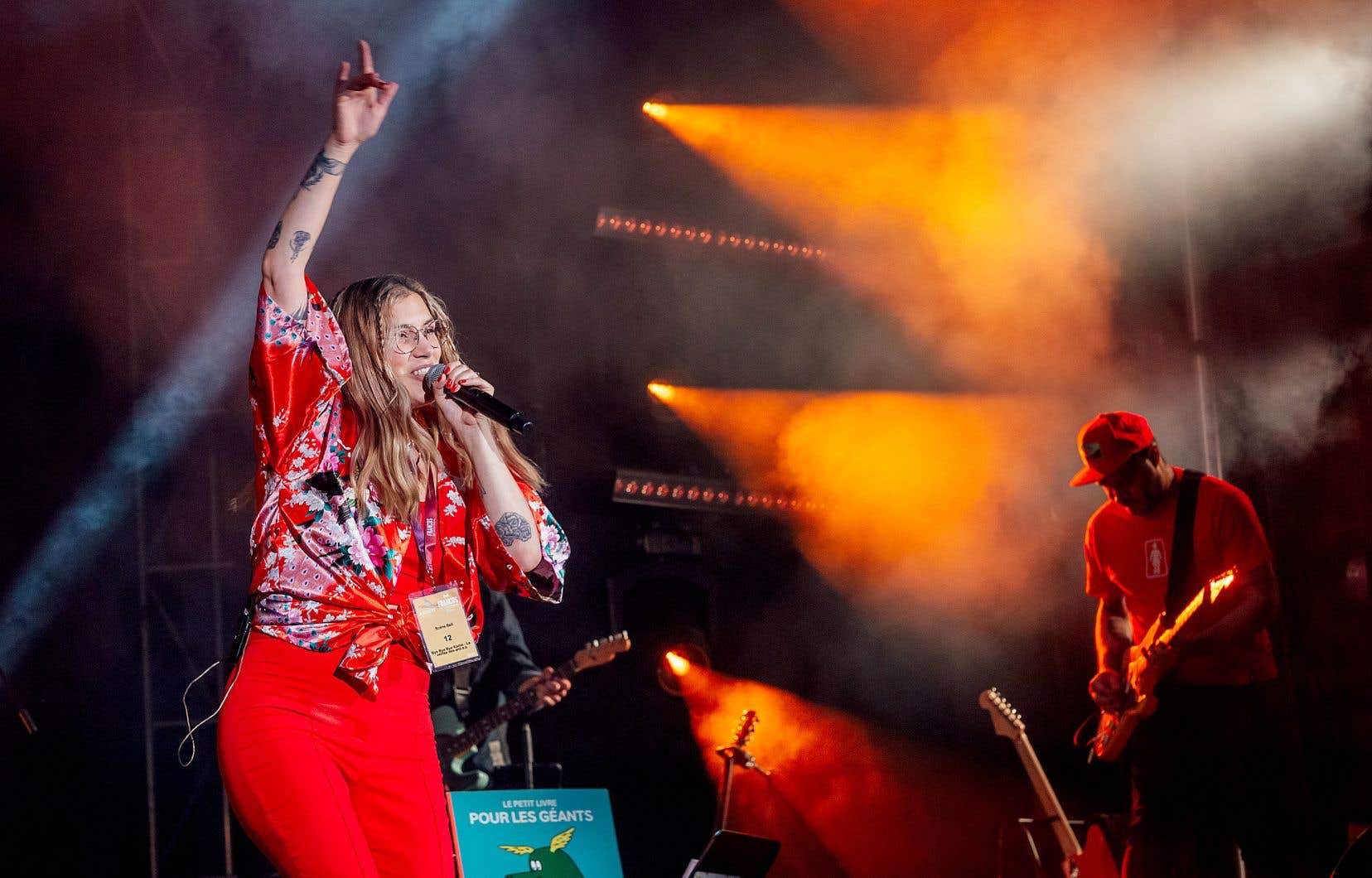 “If there is a monster under my bed, I will not sleep / I will take it by the horns and make a meal of it”, sang Karim Ouellet. On Sunday evening, place des Festivals, tens of thousands of fans and about twenty friends on stage took on the task of putting the Monster to sleep, which sometimes appeared in his songs. The concert Hello hello hello Karim, sober and at the same time festive, it has taken on the appearance of a rite of passage: from darkness to light, from pain to happiness in knowing that the deceased is still with us through his work.

“Since the sky is dark this morning / Crouched in the shadows, I’m not afraid of anything anymore,” Karim sang again in the song. The mistsfrom the album Fox (2012). The concert opened so solemnly, with her song, her voice coming out of the speakers for long minutes as her photos were projected onto the facade of the university building along the avenue du President-Kennedy. On stage, a projector illuminated his fox mask, placed at the end of a guitar neck.

When Ariane Moffatt appeared on stage to perform Once upon a time, the emotion was already palpable like the humidity of this evening threatened by the storm that never arrived: this monster too fell asleep. “Hello, my beautiful Karim! “, She launched herself before being simply accompanied by an acoustic guitar, until the ten musicians, all accompanists of Ouellet, joined her to lift the final.

Friend Gabrielle Shonk introduced herself as a relief, first for an extraordinarily intense version of In the falling nightso for the race, this accompanied by one of the singers of Karim’s orchestra, Amélie Nault. Claude Bégin and his sister Élise, Karim’s chorister and confidant, followed to offer There is no point in runninga pop hit with sensational disco accents that their friend had never played in his shows.

A good twenty minutes had just passed, but a certain heaviness persisted, on stage, and the same in the crowd. We were dancing, singing the choruses, a lump in the stomach. It took this time spent with Karim singers, Audrey-Michèle Simard, Élise Bégin and Noémie Tisserand, for the abscess to burst. Audrey-Michèle first took the microphone to sing the first verse, then the chorus, from the beautiful Marie-Joalso taken from Fox “When we are together, everything looks so beautiful / Baby please / Jesus, Marie-Jo”. Élise took her hand to sing the suite with her, then Noémie.

It was good to cry. It was a relief: we had to shed this tear to finally be able to enjoy the show, the talents gathered on stage, the great songs of Karim Ouellet, his legacy. Claude and Élise returned to the stage for an acoustic version of FoxThe Bronze blew on the coals and raised the temperature with funk-pop Heart of stonethen three of the Alaclair Ensemble troublemakers pushed the show into a professing celebration The love : “Ah-ah, tell me that there are two of us my beautiful and that there is your voice calling me / And tell me, what do we do? / Let’s make love, let’s make war ”, said the chorus of tens of thousands of spectators.

Claudia Bouvette then offered a hot version of Rosequite in the pop spirit with the rap tones of the song, and shone with the same intensity in the duet with Hubert Lenoir during Oh! No, Lenoir’s rascal buzzes around the singer like a bee around a lily. Similar chemistry for the duo that brings together Moffatt and Lenoir for unachievable – he was so playful that Ariane even lost her shoe!

Everyone, from Ariane to Valaire, invited to make a medley, valiantly puts themselves at the service of Ouellet’s compositions. This hastily assembled concert revealed his inaccuracies in playing, the sometimes erratic brass, the voices crunching here and there (which we will attribute to emotion), the few sobs in the sound system. However it was as announced: a vigil, a little casual, but so loving, generous, unifying, that we can only applaud.

After many other good numbers, a tender piano solo version of Feather served by Moffatt, a powerful duo of Fanny Bloom and La Bronze (December), the unofficial master of the ceremony Luis Clavis presented an unpublished recording by Karim Ouellet entitled Hereditary. A small part of the veil was lifted on the album that should have finished and which would probably have marked a new chapter in its musical trajectory: the text, the melody, from the great Ouellet, but affixed to a production closer to hip aesthetics. contemporary-hop, with a studio-engineered acoustic guitar motif and fat synthetic bass. The lyrics of this unreleased song have borrowed a verse from the song Family by Alaclair Ensemble, who went to sing while they “drove the chorus crazy”, as KNLO said, to make the crowd say: ” rest in peace to Karim! “

Before the encore, all the musicians flocked to the stage. Staying behind the scenes throughout the show, Sarahmée joined them and then spoke, her throat tight: “Mom,” she said, looking up at the stage, “look how people loved Karim!”.