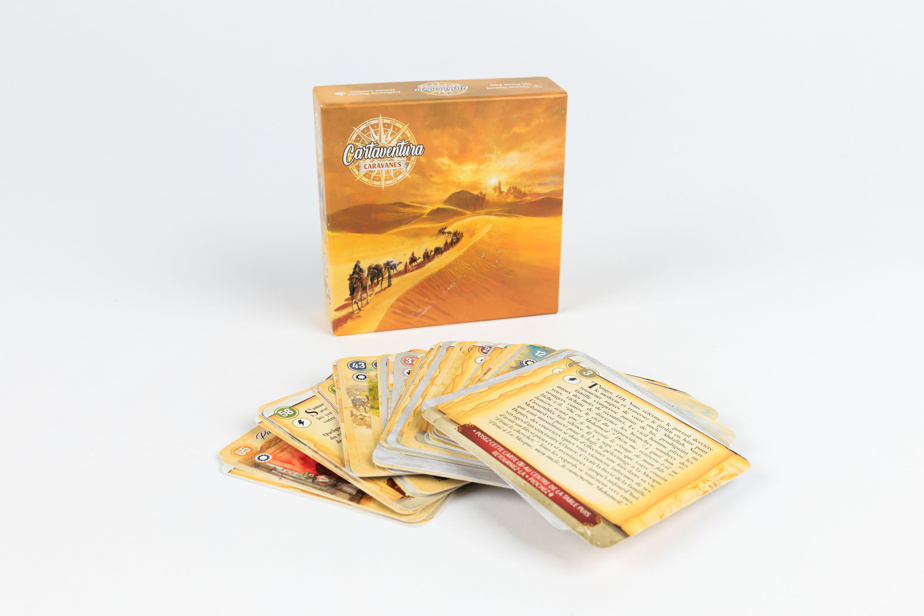 With the beautiful days come the long-awaited holidays. Here are some games that we can easily slip into our suitcases, perfect for clearing your minds after a long day on the road!

It’s hard to find a better combination than a clever game that tells us a good story. That’s what this one-hand cooperative story game offers (but requires a good table to unfold). Here, players (the game plays very well on their own) are required to complete a mission by following the instructions on the cards. Simple ? Yes, but you have to carefully choose the actions to take to be successful (kind of like in the good old books of which you are the hero!). Four games are offered, each set in a different universe, most notably the Vikings or the Silk Road. Five different endings are possible for each title. So we can’t play Cartaventura indefinitely, but we enjoy the time the adventure lasts …

Number of players: 1 to 6 players

A clever variation on the theme of the knowledge game, Zero to 100 invites players to aim as close as possible to the answer, which lies, you guessed it, between zero and 100. In short, all you need is the best estimate. possible to get rid of your cards, the ultimate goal is to have only one in front of you. The game is played in three teams – or one on one if played with two players; initially, each team has six question cards placed in front of them and must place the one whose answer is closest to the initial goal of 50. The furthest answer becomes the next goal and the unfortunate team that revealed it must draw a additional card. Note that the cards are numbered from 1 to 158, so you can use them in order, so you can play with new cards every time.

Number of players: 2 to 12 players

A game so small that it fits not in a suitcase, but in a card holder? It’s hard to find a more travel-friendly format than Matagot’s Microgames. Three games from the collection are currently offered in Quebec, including Avignon, a card movement game for two players (sort of like a string souk, but on the table!) That we were able to test. And where we quickly discovered that every strategic mistake is expensive … Also available: Stew and Circle the Wagons (yes, the games are in French despite the untranslated titles …). Each of them offers a different game mechanic. The first is an atmosphere game; the second, a placement game which, it is said, poses serious dilemmas to the players. These games obviously offer more fun than their small size might suggest!

Very simple game that is distinguished by the fact that it is not a card game! Here it is enough to place its magnets within an area bounded by a string. The first player to place all of his magnets wins. If it is forbidden to touch the magnets in place, you can change the shape of the playing area by changing the perimeter of the lanyard. The bravest can also try to make the pieces move using the magnetism of the stones, but it is frankly stressful to try such a maneuver. Because if the pieces stick together, our tour stops and we recover all the stones so magnetized. It can be played with younger children under adult supervision.

Number of players: 1 to 4 players

If your kids aren’t familiar with the Bioviva Nature Challenge line of games, summer might be a good time to introduce them to these hugely popular titles. The principle is simple and is similar to the good old game of battle. But instead of comparing an 8 of clubs and a 3 of hearts, players compare the characteristics of two animals, such as weight or height. In this new box, Bioviva has brought together 36 animals that have disappeared from the surface of the globe. This is an opportunity to learn more about the dodo, Mexican grizzly or quagga while having fun. Namely: the Défis nature collection includes more than fifty titles whose theme is always centered on biodiversity.

Number of players: 2 to 6 players

Another card game that’s easy to carry and easy to play. The idea here is to assemble an army of more or less stable unicorns, some “standard” and others with powers that can help you in your conquest. Other cards are sometimes used to protect or improve our stable, sometimes to attack those of other players. Magic cards allow you to benefit from immediate effects, while Illico cards can be played at any time, even when it’s not your turn. It’s just as fun to play as it is to read wacky descriptions of unicorns, whether it’s a unicorn, a unicorn hen, or an elegant narwhal cousin. The game can get a little redundant over time, but there are enough tips here to switch and keep interest alive! Happy holiday !

Number from 2 to 8 players