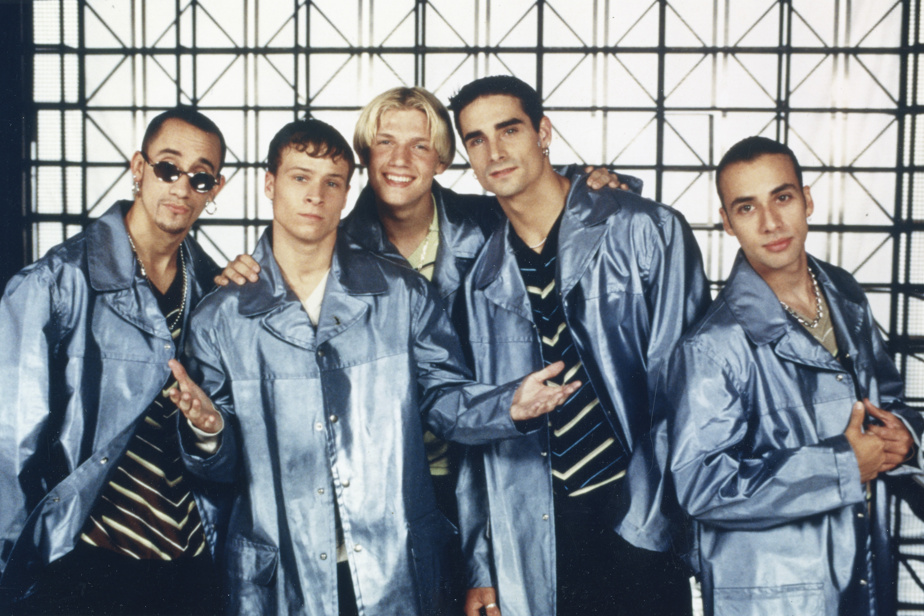 In October 1996 the Backstreet Boys released their first official album, and it was in Quebec that their success was born. So who would have thought that BSB would fill up again 25 years later – and for 19And Now ! – the Campanile Center? A look at the phenomenon with Sonia Benezra and two music industry veterans who accompanied BSB in their early days.

Howie of the Backstreet Boys surprised Sonia Benezra for her birthday on the show last September. Live from the universe. He sang for her Stop playing with my heart). “I felt like a teenager,” she says. It was sweet of her to get on a plane just to sing a song. ”

Sonia Benezra has interviewed the Backstreet Boys several times. In New York, in Paris and even at home in Florida.

The first time he met the group of guys, however, he had to persuade his bosses to TQS. “The group was not known. They were good and approachable guys and came from modest backgrounds, she says. I remember taking them shopping at Parasuco. We had closed the shop for them. Their eyes sparkled when they saw the leather coats and they dared not touch them. ”

The Backstreet Boys have always been grateful to Quebec, the cradle of their worldwide success.

Stéphane Drolet, now representative at Sony (and at the time for BGM), is considered by his peers to be the sixth member of the Backstreet Boys in Quebec. He was at the forefront of the The Backstreet Boys mania.

In the fall of 1995, remember, Quebec commercial radio stations were the first in North America to play BSB’s first single, We made it.

It was in February 1996 that AJ McLean, Howie Dorough, Nick Carter, Brian Littrel and Kevin Richardson first visited Montreal. On the program there was a visit to MusiquePlus during the broadcast Get out of here a show at the Dôme and another at the famous Fuzzy bar in Laval.

On Saturday, BSB would perform at the Place Côte-Vertu shopping center. After their fiery performance, the autograph session had to be canceled for safety reasons. While we were expecting just 400 people, the crowd exceeded 5,000 heads!

From their first visit it was possible to perceive their undeniable talent, their work ethic, attention and respect towards their fans.

Stéphane Drolet, representative of the BGM at the time

It was in August 1996 that the first official Backstreet Boys show took place in Quebec. It was at the Saint-Jean-sur-Richelieu International Balloon Festival and Noir Silence provided the first part. Number of people present: 60,000!

The group could not do a sound test, Stéphane Drolet recalls, because the security team felt that too many people had arrived early at the festival site.

“It was in a hotel in Saint-Jean-sur-Richelieu that day that the president of Jive Records and the top management of BMG Music Canada at the time changed their international sales strategy in view of the release of the album in Canada. . ”

A few weeks earlier, BSB had returned to Quebec for another promotional tour and sold-out shows at the Auditorium de Verdun and Colisée de Québec.

Leisa Lee – who now has her own PR firm and who orchestrated Howie’s visit Live from the universe – was in the crowd at the Verdun Auditorium. At the time he was working for the influential show producer DKD (Donald K. Donald). She still remembers her former boss telling her, “These guys are going to be superstars. ”

Leisa Lee wasn’t as convinced as he was. “Trust me,” Donald K. Donald told him. I’ve seen teens cling to Corey Hart. ”

“Donald had good instincts and he was right,” says Leisa Lee.

The The Backstreet Boys mania

The Backstreet Boys have received a gold record and it is Stéphane [Drolet] who gave it to him. They were stars here while in Orlando, their hometown, they walked around like strangers.

Leisa Lee, who worked with BSB

Thus it was that the BSB conquered Quebec before the United States and marked the beginning of the era of Boy bandjust before Nick Lachey’s 98 Degrees and Justin Timberlake’s NSYNC.

Stéphane Drolet and Leisa Lee accompanied the BSB on their many visits to Quebec over the span of two years. “We took them to the cinema or McDonald’s,” she says. They were kind and generous. I’ve never heard them complain. ”

When the group visited MusiquePlus, they had to close rue Sainte-Catherine. “The decibel level of screaming and so much crying, we’ve never seen that. Especially since we were coming out of grunge, says Leisa Lee. There were no groups for teenagers at the time. ”

Wherever the BSB went, it was madness and we don’t dare imagine what it would be like with social networks. “The award goes to a fan found in an air duct leading to the BSB bedroom floor,” explains Stéphane Drolet.

BSB’s debut album featured many pop hits, including Descend And I will never break your heart. The quintet had worked with the Swedish Max Martin, unknown at the time, but who today occupies the third ranking of songwriters to whom we owe the highest number of numbers 1 in the rankings. Scoreboard (after Paul McCartney and John Lennon).

Max Martin has always remained a close associate of BSB and allowed them to play on the radio with the famous refrains of As long as you love me, I want it to be like this And Shape of my Heart.

BSB have sold 130 million career albums. “Their melodies are super good. They go straight to the heart, “points out Sonia Benezra, who praises the talent as a dancer and singer of Nick” the rebel “, Brian” the accessible “, AJ” the tormented “, Kevin” the serious “and Howie” the shy “.

At 19And show at the Bell Center

Leisa Lee remembers the first BSB show on January 6, 1998 at the Molson Center. “It was at the start of the ice storm. ”

The print It was there. Other noteworthy visits? In 2005 for the release of the album Never gone, where the BSBs were making a comeback after years of absence and personal hardship. Also noteworthy is the 2011 tour with New Kids On The Block.

On Saturday they will give no less than their 19And show at the Bell Center as part of their 9And album, DNA. You should also know that a Christmas drive is planned for the fall.

The BSBs turn out to be the only ones group of guys of his time for having survived the test of time. Leisa Lee remembers two years of residency in Las Vegas, from 2017 to 2019, and the record crowd at the Festival d’été de Québec five years ago.

The secret of their success? “They grew up together. They are like brothers who protect each other and embody the idea that anything is possible, replies Sonia Benezra. In Quebec, and we experienced it with Céline, we like artists who start from nothing and end up conquering the planet. ”

In 2021, Sonia Benezra asked the BSB if they could send a video to a young woman from Matane who would receive medical assistance in the event of her death two days later. Howie, AJ and Kevin answered the call immediately.

“Making us feel special: this is the magic of the Backstreet Boys”, concludes Sonia Benezra.