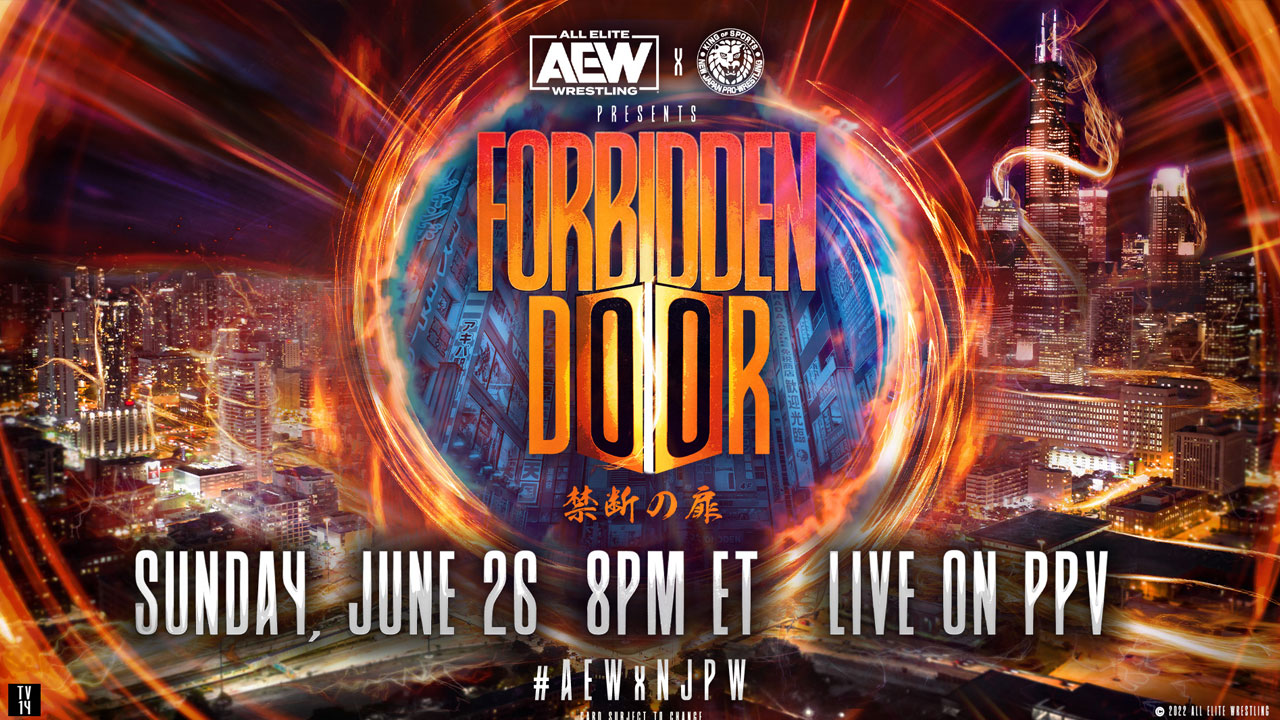 AEW and NJPW preview their first joint PPV with “Forbidden Door” 2022 on June 26th. The event takes place at the United Center in Chicago, Illinois.

– Tonight is AEW x NJPW Forbidden Door, the pre-show kicks off with the arrival of Aaron Solo and QT Marshall followed by YOSHI-HASHI and Hirooki Goto for the first game.

QT Marshall and Aaron Solo versus Hirooki Goto and Yoshi-Hashi

At the end of the match, Hirooki Goto takes Aaron Solo on his back, Yoshi-Hashi superkicks him and then Goto knocks down his Ushigoroshi. Hirooki Goto and Yoshi-Hashi finish with Shoto for the win.

At the end of the match, Lance Archer knocks out Nick Comoroto who is in the corner of the ring with a punch, then carries his Crucifix Bomb for victory.

– Clark Connors says he has this opportunity due to Tomohiro Ishii’s injury and wishes him a speedy recovery. She is here tonight to show what he can do and rock the world. He ends with his phrase “Let’s Get Wild”.

At the end of the match, Swerve Scott knocked out El Desperado with a Superkick, then hit him with a Slingshot Double Stomp and Keith Lee followed his Ground Zero on Yoshinobu Kanemaru for the win.

At the end of the match, Billy Gunn takes his Fameasser to The DKC, then Max Caster ends up with an Elbow Drop for the win.

– The AEW x NJPW Forbidden Door PPV kicks off with commentators welcoming us and the arrival of the Jericho Appreciation Society followed by Minoru Suzuki. Then there will be Shota Umino, Wheeler Yuta and Eddie Kingston.

The winning team will have the advantage for the Blood and Guts.

During the match, Shota Umino uses a Tornado DDT on Chris Jericho then continues with a Brainbuster but that’s not enough.

At the end of the match, Shota Umino got rid of Samy Guevara and Minoru Suzuki with elbow strikes, but was completely blown away by Chris Jericho giving him his Judas Effect for the win.

At the end of the match Rocky Romero throws himself on the ropes, but is greeted by the FTR who bring him their Big Rig for the victory.

– Juice Robinson says he is the true US IWGP champion and tonight’s game will be a contender’s game. Jay White says Juice Robinson beat Moxley, Hiroshi Tanahashi and Will Ospreay to win that title and never lost it, so he’s the rightful champion. He concludes by saying that he too will beat three other fighters tonight in the 4 Way Match.

Tomohiro Ishii is injured and is replaced by Connors.

Pac vs. Miro vs. Malakai Black vs. Clark Connors

At the end of the game, Malakai Black tries to wear a Jijugatame about Clark Connors and in the meantime Pac takes the opportunity to wear a 450 splash to break the hold then continue with hers Brutalizer for R victory by submission over Clark Connors.

Hiromu Takahashi he cannot go to America, because he has a fever, and is then withdrawn from the game.

During the match, Shingo Takagi plays El Phantasmo with a Pumping Bomber but it’s not enough.

At the end of the match, Shingo Takagi harangues the crowd and first wears El Phantasmo for Made in Japan but changes his mind and wears the last of the dragon for the victory.

– Chris Jericho tells Shota Umino that he respects him and admires his performance tonight, then throws a fireball in his face for being a magician.

At the end of the match, Pink Thunder blocks Toni Storm’s Storm Zero attempt, then twists his arm and knocks him to the ground hard. Thunder Rosa then continues with its final showdown for victory.

Will Ospreay (c) against Orange Cassidy

At the end of the match, Will Ospreay stuns Orange Cassidy with a hidden blade and ends up with his Stormbreaker for the win.

After the match, Will Ospreay and Aussie Open face Orange Cassidy. Roppongi Vice comes to his rescue, but they are quickly put out of harm’s way, so Katsuyori Shibata’s music plays and he cleans himself up, then celebrates with Orange Cassidy in his own way.

At the end of the match, Claudio Castagnoli lands a Popup European Uppercut on Zack Saber Jr. then a Discus Lariat and concludes with his Ricola Bomb for the victory.

Real-time reactions with your comments: