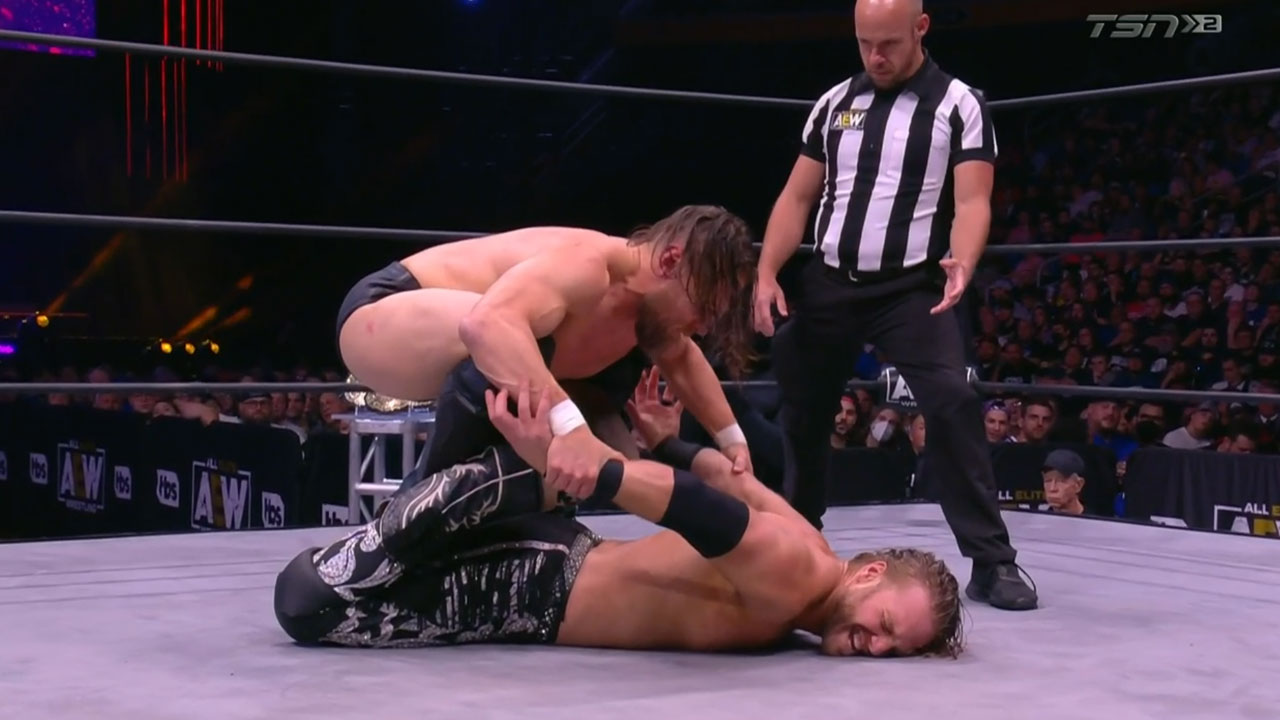 The commentators are Taz, Tony Schiavone and Excalibur.

– Tonight there is AEW Dynamite, the show starts with the commentators welcoming us and we see the images of the return of MJF on All Out last Sunday. We then find Tony Khan behind the scenes. Khan says he was forced to leave the trio titles and the AEW world title vacant after all. The new champions of the Trio will be crowned tonight in the Best Friends match against the triangle of death. The world title is the most prestigious in the sport, so we will have a Grand Slam tournament to crown the new champion. Adam Page, Guevara, Danielson, Allin and others will face off in this tournament. A new champion will be crowned at the AEW Grand Slam on 21 September. Khan promises that AEW will put on a good show and that the company will give its best.

– MJF arrives in the ring with a standing ovation. MJF says the devil is back. Says MJF, number one: who is excited to see MJF? The crowd approves. MJF says he loves Buffalo, Buffalo’s best QB is Josh Allen. MJF says last time we saw him, he must have said some hurtful things, but we all agree on one thing, he didn’t mean it, it was a joke. He loves AEW, he will never leave this place. MJF releases an ” AEW ” chant. MJF says he didn’t mean to insult fans, without us there would be no MJF. MJF says he has to talk about the big elephant in the room and no, he’s not talking about the big elephant in the front row, it’s beautiful, they will see each other tonight. MJF says the world title is vacant, a new champion will be crowned, we all agree that he knows a guy who deserves this championship, him. MJF says he’s working smart, so he’s not going to participate in the tournament because his token grants him a title chance whenever he wants. MJF says Tony pays him a lot of money too. MJF says we think it’s a dark time, but no. The company needs a leader, a smart Jewish man with a name starting with an M, who splits the ocean in two to bring people to the new land. He is better than Moses. He will win the AEW world title, because he is MJF and he is better than us. Jon Moxley’s music interrupts MJF and he steps into the ring.

Moxley says MJF talks about shit. MJF asks if Jonathan (moxley) doesn’t think he needs to be here in Buffalo? Faced with the grotesque, poor folks who have the worst football team in the United States? Josh Allen is bad! MJF says maybe he should win the title to get him into a real wrestling company, with real fans and real wrestlers, like his good friend Cody Rhodes did. And maybe he should go and work with a real boss, the only good Khan in this business. Not to mention his personal hero, The Game, would be good for business. Moxley swings MJF’s microphone to the ground. Moxley says it’s neither the time nor the place, he’s not in the mood. MJF has to leave the ring now, otherwise he will help him! The two prepare to fight, but in the end MJF decides to go backstage.

Moxley says he’s not in the mood, he’s angry, he’s humiliated. From many things, but above all from the fact that he no longer has the world title. The world title means a lot to him and to the people. The passion for sport, the passion for business, the passion for the guys behind the scenes, the passion for the fans here and at home. The title represents the heroes during the pandemic, the dream when they founded AEW, and shows the world what wrestling is really about. It represents the freedom to be what you want. It represents being better than yesterday. It represents the overcoming of one’s demons. The title represents everything he loves about the business. But the fact remains that on Sunday he lost and it was his fault, he made a mistake. But now he has another chance to claim his place on top of the mountain against Chris Jericho, the best in history, Bryan Danielson, a better wrestler than ever, and youngsters like Darby Allin and Adam Page. . Moxley says he will give it his all! It’s not just the time to win, it’s time to become a legend.

The titles are vacant after All Out following the suspension of the Elite.

At the end of the fight, Trent makes his Pile Driver on Penta and covers him, but Pac breaks the count. The six wrestlers enter the ring, Death Triangle executes a Triple Superkick and a Triple Canadian Destroyer on the wrestlers. Fenix ​​and Penta do their Pile Driver on Taylor. Fenix ​​launches a suicidal jump on Cassidy and Trent at the bottom of the ring. Pac continues with his Black Arrow on Chuck for the count of three.

– Behind the scenes, Tony Schiavone is with the Dark Order to talk about their pain and disappointment for not being champions of the Trio. José L’Assistant arrives and offers a contract to number 10 saying that Andrade still wants him. Evil One pushes him saying they have already refused, he has to leave. Andrade approaches with Rush and says they would like to talk. John Silver asks if he wants to talk with fists. Andrade leaves with Rush.

– After the break, we feature an After All Out video where Jamie Hayter rejects Britt Baker’s apology after their match.

If Ford wins, he will have a chance for the AEW women’s interim title.

At the end of the fight, Storm charges Ford into the corner. Ford wants to do a Suplex, but Storm lands it with his DDT for the count of three.

– Action Bronson says he is ready for the AEW Grand Slam.

– The Acclaimed comes to rap, but Swerve in Glory’s music cuts rap. Swerve Strickland says he’s sorry, did the crowd want to keep hearing those things? The crowd insults him asshole. Strickland says he has a joke for us: The Acclaimed Tag Team Champions. Billy Gunn says it’s no longer Strickland’s house here, but Daddy Ass’s. Anthony Bowens says that in two weeks they will have their Grand Slam rematch thanks to the fans. They will take the gold home because everyone loves The Acclaimed.

– Backstage, Tony Schiavone is with the Jericho Appreciation Society to talk about the big All Out win. Jericho says it was huge against Bryan Danielson. It’s better than ever. In 2022 Chris Jericho found the fountain of youth and drinks from it. That’s why he beat Danielson at his own game: he’s the best wrestler, the best entertainer in history. Jericho says that for this reason he will beat Danielson once again next week and go to the Grand Slam to become world champion for the 8th time. It is the title of him, his company, his dressing room and no one will ever get him, EVER ! For JAS, he has two siblings with Sammy Guevara who will face Darby Allin in the tournament this Friday at Rampage. Guevara says he will beat her turtle ass. Jericho says Garcia will play the biggest game of him in his hometown tonight. He knows that Garcia will win, but since Garcia has decided to leave them alone on Sunday, they will leave him alone tonight. Garcia will have to beat Yuta alone.

Wardlow hits Nese and the Powerbombs. Wardlow gives him another Powerbomb and a third on behalf of three in less than two minutes.

– After the fight, Nese wants to do another Powerbomb, but Mark Sterling gets on the apron. Wardlow takes Sterling into the ring for a powerbomb, but Josh Woods pulls him off the ring to save him. Wardlow says everyone has always told him what to do, but he’s the champion and it’s time to remind everyone that this is Wardlow’s world!

– We present a video of the match between Guevara and Allin for the AEW World Tournament which will take place on Friday at Rampage.

– We present a video about the rivalry between Jungle Boy and Christian Cage. Jungle Boy tells Christian to have an operation and when Christian returns he will take care of him. Jungle says he took Luchasaurus for three years to make a sample with him. People said to quit and maybe this is the sign.

– Back, Stokely Hathaway is on stage with his clan. Hathaway says everyone wants an explanation for their action on All Out. All Out was the highlight of his career. A producer stops Hathaway saying that time is up. Hathaway grabs the producer by the neck and says to show him some respect. Hathaway hits him with the microphone and the clan attacks him. W Morrissey ends with a Big Boot about the producer.

– Rampage events announced this Friday: Samoa Joe, the Guevara vs. Allin, Serena Deeb vs. Madison Rayne, Castagnoli will defend her ROH title against Dax Harwood. Next Wednesday for Dynamite: Jericho vs Danielson for the tournament, Jon Moxley vs Guevara or AllIn for the tournament.

– Westside Gunn arrives on stage to sing his rap for Garcia’s theme song.

At the end of the fight, Garcia manages to apply a Single Boston Leg Crab to the center of the ring to knock him out.

– After the fight, Bryan Danielson arrives during Garcia’s celebration. Yuta shakes hands with Garcia. Danielson takes the title away from Garcia, but it’s to put it around Garcia’s waist. Danielson and Garcia shake hands in the ring and at the same time Chris Jericho arrives on the scene, in shock. The show ends like this.