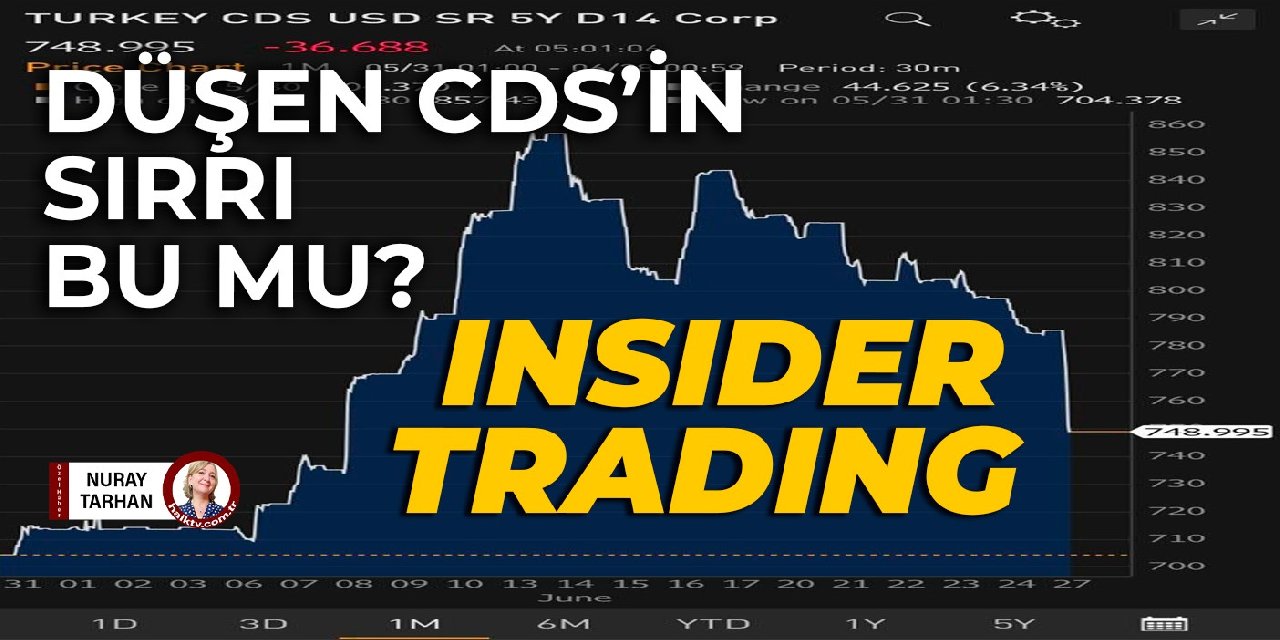 CDS, which show the risk of bankruptcy in Turkey, broke all-time highs of 854 in recent weeks and have become one of the most talked about topics on the economic agenda. While 5-year CDS recorded 850 basis points, these rates exceeded 1000 basis points for maturities up to 1 year. As of Friday, it has begun to loosen from these levels. For a moment we were happy to think that the risks to Turkey had diminished, but it turned out that this was not the reason.

“They heard about the deal in advance”

Financial advisor and board member of DEVA Party Headquarters Omer Rifat GencalSecond, the reason for the decrease in CDS is the credit constraint imposed by the Supervisory and Banking Regulation Agency on companies with $ 900,000 in foreign currency on Friday evening. Gencal, who said that companies and banks, informed of this regulation through insider trading, thought they would not be able to find credit internally and that CDSs began to ease with the purchase of Eurobonds from part of foreign investors.I think CDS eased to levels of 770 for 5-year maturities and to levels of 725 for 1-year CDS as foreign investors, who sold their Eurobonds and eliminated Turkey’s risk, also divested. the CDS “. She said.

“What he said for GES was for this deal”

Minister of the Treasury and Finance Nureddin NabatiPresident of the income-indexed bill of exchange (GES) Tayyip Erdoganto “It will reduce the dollar by 5-6 lire” Claiming the backstage of what he said was actually related to this deal, Gencal said:

“With its regulation, the BRSA has banned companies with certain criteria from using loans if they hold gold and cash in foreign currency. If this cash is valued in Turkish Eurobonds, it is not valued as cash by the BRSA and the Eurobonds received are deemed to have dissolved the excess foreign currency in hand. With companies and banks thought to have heard of this regulation in advance, Eurobonds in the hands of foreign investors have started to ease into CDS. When foreign investors failed to find buyers, they decided to buy Turkish CDS to hedge against default in exchange for Eurobonds they couldn’t sell, and CDS levels hit record highs. I think CDS eased to 770 with 5-year maturities and 1-year CDS to 725 due to the fact that foreign investors who sold their Eurobonds and eliminated Turkey’s risk also divested the CDS. In Eurobonds, there was a similar movement due to regulation enacted by the BRSA and the interest rates of 5-year dollar-denominated Eurobonds, which rose to 11.5%, fell to 9.6%.

Gencal pointed out that these regressions can be regarded as a positive development under normal circumstances, “However, the fact that the people who buy the Eurobonds are Turkish companies due to regulation and make investments outside their field of activity makes these companies riskier.” She said. At the same time, Gencal stressed that it should be borne in mind how bad and unsustainable this development is, as it causes the country’s foreign exchange resources to go abroad. “In short, the lack of economic policies that provide permanent improvement after the artificial decreases made with regulation increases the possibility of encountering a stronger and opposite result” He said.

What is meant by insider trading?

The term, which means insider trading, means providing an unfair advantage or eliminating a loss in a way that disrupts equal opportunities among those operating in the capital market by using information not yet disclosed to the public, which can affect the value of market instruments. of capital, for the benefit of individuals or third parties.