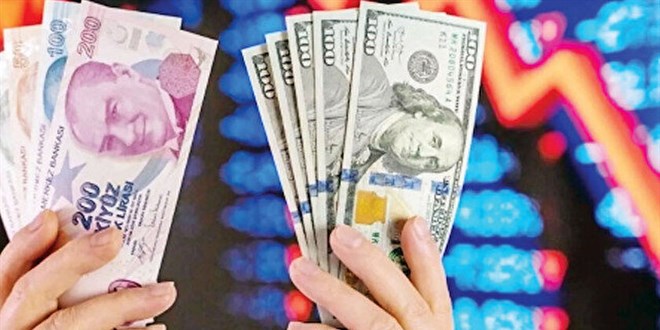 According to the compilation of the corresponding AA of the Medium Term Program (MTP) for the years 2023-2025, in order to increase the demand for instruments denominated in Turkish lira and reduce the volatility of exchange rates, the demand for a protected deposit in currency was introduced in December last year, so its scope has been expanded.

As of September 1, 2022, the total balance of the KKM reached 1.3 trillion lire. As the KKM rose, there was a decrease in foreign currency deposit accounts and domestic residents’ foreign currency deposits decreased from $ 237 billion at the end of the year to $ 212.7 billion as of August 26. Over the same period, the dollarization rate of resident deposits fell from 62.7 per cent to 53.1 per cent.

During the programming period, the aim was to strengthen financial stability through regulatory measures aimed at increasing the resilience of the economy against external and temporary volatility and minimizing vulnerabilities stemming from reliance on external financing, ensuring that the financial sector supports sectors with high added value and contributing to exports.

In this context, objectives and policies were determined. Consequently, it will be ensured that financial intermediation operations are carried out in line with policies aimed at increasing the attractiveness of the Turkish lira during the program period.

Incentive mechanisms will be put in place in order to increase the share of deposits in Turkish lira on the total.

In the field of payments, the Open Banking and Public Payment Gateway projects will be commissioned in 2023 and an effort will be made to expand payments with the FAST and TR data matrix.

Widespread use of TROY, the national and national card scheme, will be increased in card payments.

In line with the results of the first and second pilot phases of the Digital Lira Research and Development Project, tests will begin on the use of the Digital Turkish Lira for payments.

The Bringing Gold-Type Physical Assets to the Financial System (FATSI) application, which aims to bring gold under the cushion of the economy, will be developed and expanded.

The application for the YUVAM account, which provides resources to the country’s economy, will be developed and expanded.

New audit practices and methods focused on supervisory technologies will be implemented, adapted to the size, complexity and development of the financial sector.

The necessary changes to banking legislation will be made to comply with the final Basel III agreement, which the Basel Committee plans to implement in early 2023, and will be fully implemented in 2025 in parallel with the EU.

The institutionalization of the participation financing system in the areas of standards, rating, licensing and dispute resolution will be strengthened and its solid legislative infrastructure will be ensured.

By expanding capital markets and the investor base, new products, services and markets will be developed that also support development in the participatory financing sector.

A long-term strategy in the field of financial technology will be announced and a Fintech guide for Turkey will be prepared for domestic and foreign investors and entrepreneurs.

Critical financial technology companies that provide financial ecosystem support services will also be included in the scope of the audit and sanctions.

Cryptocurrency trading platforms will be included in the scope of the regulation.

As part of harmonization with the European Green Deal, guides will be prepared in the areas of strategy formulation, corporate structuring, risk management, reporting and public disclosure for the development of green banking practices.

Strategy development and regulatory studies will be carried out to update sustainability reporting principles in line with international developments, to regulate corporate investors and companies providing sustainability advice with responsible investment approaches, and to identify climate and climate risks. integrate them into surveillance practices.

Homeowners will be offered mandatory disaster insurance, designed as a holistic disaster insurance product to protect citizens from complaints that could result from natural disasters and to ease the public burden.

Practices will be developed that support increasing product diversity in the individual and private pension insurance branches in order to raise the insurance rate and number of participants to a sufficient level in Turkey and to deepen and expand the private insurance and pension sector .

The automatic participation system will be holistically evaluated together with other pension systems and will be transformed into a long-term and complementary savings and private pension scheme for employees.

DON’T THINK YOU WILL INVEST IT HERE! SEE WHAT YOU CAN DO WITH 100,000 TL OF VIRTUAL MONEY!