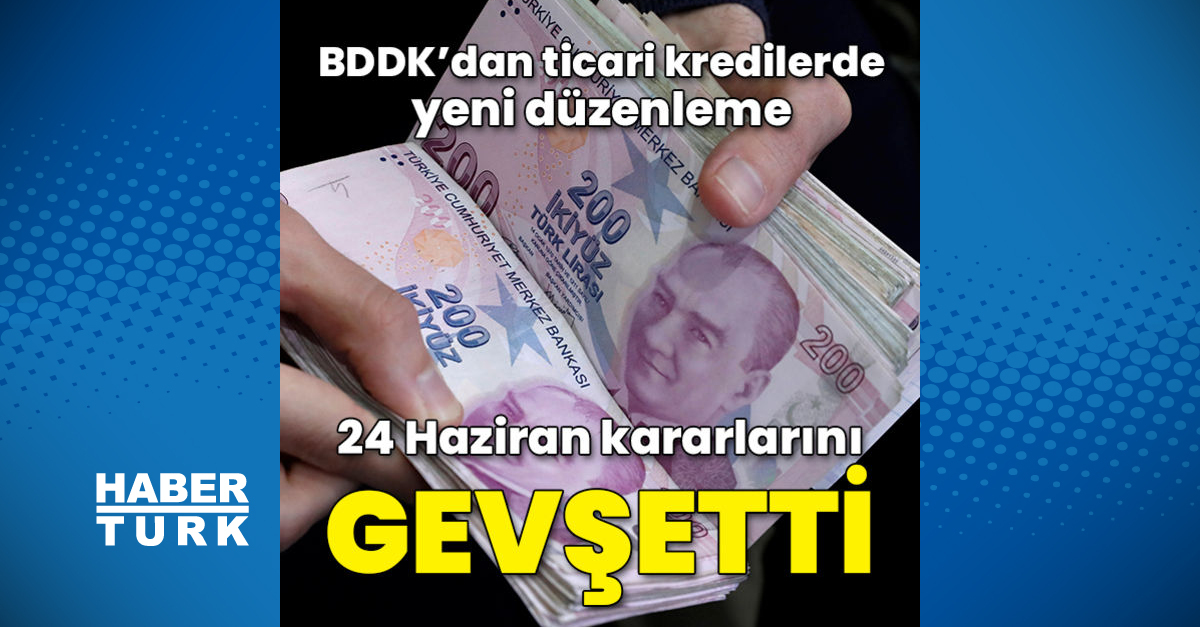 Softening of the regulation of commercial loans by BRSA

The Banking Regulatory and Supervisory Agency (BDDK) has revised its decision on the TL credit restriction regarding companies with a certain amount of foreign currency deposits.

According to the Bloomberg HT news, with the decision made following industry inquiries and suggestions, some changes were made to make the implementation easier for both banks and businesses.

Some of the novelties were the rumors announced by Alpaslan Çakar, president of the Association of Turkish Banks, in the Habertürk publication. On the other hand, new steps have also been announced that expand the scope of TL credit restrictions.

THE SYSTEM INCLUDES THE FINANCIAL CONSULTANTS

According to the decision made by the BRSA, it was ensured that the information and documents required by the companies to be approved by the auditing firm and presented to the banks can also be obtained with the approval of the public auditor (YMM). There are over 300 independent auditing firms in Turkey. After criticism from independent auditors that they would not be able to meet the number of documents required by the industry, this requirement was relaxed and the CPAs were included in the system.

USE OF CREDIT WITH RETURN

Under the previous decision, companies obliged to provide information and documents when applying for the loan were allowed to use the loans on the basis of their statements. It has been regulated that, after the use of credit, the accuracy of such statements should be presented to banks in quarterly calendar periods, approved by the independent auditor or CPA. Therefore, the document load of the companies was reduced.

The tables presented to the Revenue Agency will be taken into account. Furthermore, for the inclusion of the CPAs in the process, it was decided to apply the most up-to-date financial statements (excluding companies with consolidated financial reporting obligations) that will be taken as a basis in the implementation of the decision, such as the most updated financial statements presented at the Revenue Agency pursuant to the TPL and related legislation, including provisional tax periods.

The BRSA also made the following facilitation changes:

– In case of banks’ hesitation as to whether or not companies are audited, the way for companies to certify banks that they are not audited, in addition to the documents they will receive from the CPA or the independent auditor, is the way was opened for them to receive the incentive documents from the SMMMs.

-Products such as the direct debit system (DBS), corporate credit cards and supplier financing are excluded, which banks undertake to pay to third parties other than their creditor customers, in order not to jeopardize the normal functioning of the commercial life.

– It was decided not to include the foreign subsidiaries and associates of these companies in the credit limit assessment under this decision for companies that are required to prepare consolidated financial statements, thus exempting the foreign currency assets of the aforementioned subsidiaries and connected abroad from the calculation under the limitation.

– Companies whose audit obligation will begin for the first time at the end of 2022 are also exempted from the scope of the decision.

In addition, if it is determined that companies do not deliver documents to be presented to banks and other entities as approved by the SMMM, CPA or independent auditor until the end of the month following the quarterly calendar periods for loans, use, or if it is established that they have made false statements based on those documents, even if they do. It was decided that companies cannot make a new TL commercial cash loan and, as of June 30, 2022, a 500% risk weight will be applied to all TL commercial cash loans made to these companies.