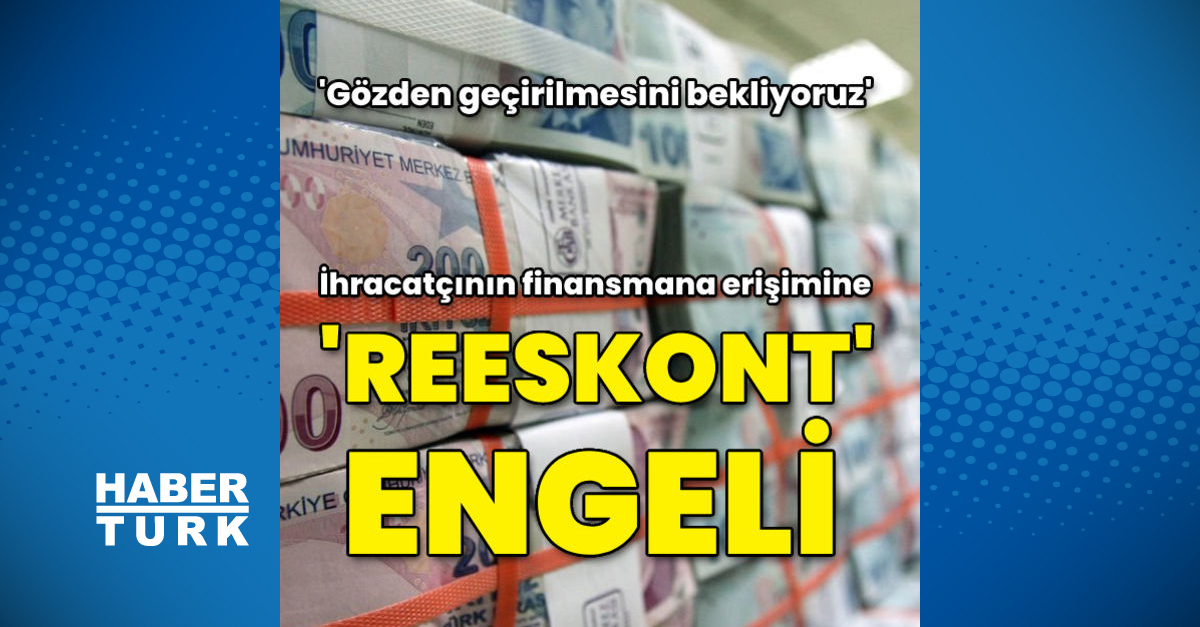 The latest Central Bank regulation (CBRT) on rediscount credits made available to exporters in June limited companies’ access to finance.

Under the aforementioned regulation, exporting companies had to commit to sell 40 percent of their income to CBRT, 30 percent to a bank, and not to buy foreign currency for one month after the sale.

It is learned that the new conditions have reduced the demand for income-generating loans and it is said that even companies that want to eliminate their access to financing with other instruments are exposed to high interest rates.

‘WE ARE IN PRISON WITH HIGH INTEREST LOANS’

Speaking with Habertürk on the matter, TOBB’s ready-to-wear and apparel Assembly President Şeref Fayat stressed that the unannounced deal caught companies off guard.

Pointing out that if the application does not change otherwise, Fayat said: “We need new regulation before Eid and at the latest after Eid. If this continues, the exporter who does not want to change the foreign currency in his hand. he will not be able to use the credit to rediscover. At this point, problems have arisen in the markets. The exporter uses revolving credit. We are doomed to use high-interest loans, there are loans with interest rates of 50 percent, “he said.

Fayat stressed that in order to protect industrial employment, credit channels should be open and it should be possible to use loans on suitable terms.

‘COMPANIES DO NOT HAVE FOREIGN EXCHANGES FOR PLEASURE’

Yaman Tunaoğlu, chairman of the board of directors of the Turkish Electronic Industrialists Association (TESID), stressed that companies exporting technology products need to have foreign currency in hand.

Noting that it would be helpful to review the application, Tunaoğlu said: “If there is a goal of increasing exports, and especially technology exports, this application should be revised.”

Adil Pelister, chairman of the board of directors of the Istanbul Chemicals and Products Exporters Association (İKMİB), said that the biggest problem for companies is getting finance.

Explaining with an example the problems encountered in accessing finance, Pelister said: “For those who want a loan of 1 million dollars, the banks give only 300 thousand dollars”.

‘IF THERE IS NO PERMANENT SOLUTION, IT WILL HAVE’ NEGATIVE EFFECTS ON THE ECONOMY ‘

Erdal Bahçıvan, chairman of the board of directors of the Istanbul Chamber of Industry, also assessed the problems faced by the industrial sector in terms of access to finance.

Bahçıvan said: “There have been serious problems in the credit resources of Türk Eximbank, which is the most important financial support item for our exporting industrialists, which is the strongest support and lifeline for our economy, production and current account deficit, with the recent economic policies. Despite all the goodwill of Türk Eximbank, there have been serious problems. These problems also cause problems for the management of the bank. First, we observe and observe that the developments that have become gangrenous with the latest BRSA applications, which are caused by several problems emanating from the Central Bank, are starting to create very serious problems in terms of our industrial exporting access to quality finance, “he said.

Noting that developments have dragged companies into a financial bottleneck, Bahçıvan said: “Especially in a sensitive time like before the holidays, this problem leaves our manufacturing and export world with an undeserved financial bottleneck. our industrial and export sector does not deserve such unpleasant surprises. Let’s leave it to that. We are sadly observing that we are on the eve of some developments that will adversely affect our economy, both in terms of exports and production in the near future, to unless a permanent solution is found as soon as possible.

With the regulation enacted in June, the CBRT extended the deadlines for exporters who will use TL-denominated rediscount credits, lowering interest rates.

As a result, the maximum expiration of the TL discount was determined at 360 days and 720 days for the defense sector.

Companies using TL rediscount will commit to selling 40 percent of their income from exporting goods or services until the loan maturity to CBRT, 30 percent to a bank, and not buying foreign currency for 1 month after the sale.