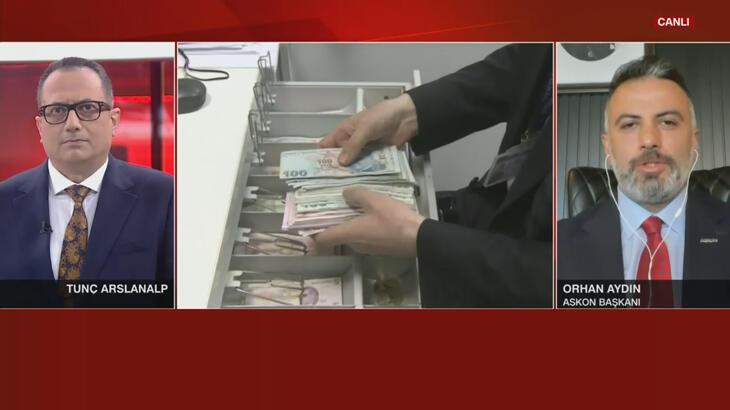 The eyes and ears of millions of employees are in the regulation of a further increase in the minimum wage … Orhan Aydın, head of the Association of Anatolian Lions Businessmen, announced both the decision made by the BRSA and the minimum wage planned. Aydın used the following statements in the CNN Türk live broadcast:

WHAT DOES THE BUSINESS WORLD SAY TO THE BRSA DECISION?

The statement issued by the BRSA on the 24th led to a decrease in exchange rates. The bigger problem is that we, as the business community, have communicated to the BRSA and the Central Bank that we are going through a time when SMEs are having difficulty accessing finance.

We have said that private banks have started charging SMEs with interest rates above 35%, even as high as 50% yesterday and today.

The number of companies in foreign currency accounts worth TL 15 million is less than 10 thousand. It was a very limited business decision. The main problem in this case was that companies in need of financial and production investments were supported and the manipulation was carried out using appropriate loans in Turkish lira and switching to foreign currency in private banks.

Although they did not need foreign currency for a long time, they used these resources themselves because they could obtain adequate TL loans from SMEs. In this difficult time, especially our SMEs, our traders should be supported. In the next period, as our President said, we want to enter a period of growth with production and exports in the next period of Turkey. We believe this decision by the BRSA is appropriate and we support it.

WHAT DO YOU THINK ABOUT THE MINIMUM WAGE? ARE THERE OCCUPATIONAL PROBLEMS?

In particular, I want to express this. In the world where all economies contracted in 2020 and 2021, Turkey has passed the period of the pandemic with 5 million new jobs. Turkey has seen a 20% increase in employment over the past two years.

The minimum wage will take effect, but we don’t have a company that employs the minimum wage in our metropolitan cities. A regional minimum wage. A 40 percent increase in metropolitan areas is needed. We, as the business world, will be happier if there is a minimum wage that can be sustained with a click in our developing provinces. We all know that the livelihoods in Anatolia are not the same as in Istanbul and Ankara.

We hardly have any minimum wage workers left in Istanbul. There is employment that is in the 5,500-6,000 range. However, if we reach 6000 TL, we will face unemployment, definitely not. Today our businesses grow. An employer cannot grow without workers. We will all go through this process by giving up. As employers, we will support our workers. We will have spent this period with the least injury.

WHAT EXPECTATION DO YOU HAVE FROM THE TABLE OF THREE TOMORROW?

Our expectation is an expectation in the 5,500-5,700 band. This will be a figure close to inflation. Since our citizens weren’t fueled by inflation at the end of 2021, I hope tomorrow’s decision is the same. As employers, we will be supportive. “

YOU MAY BE INTERESTEDWhat is the provisional increase in the minimum wage? Experts answered the critical questionView the news