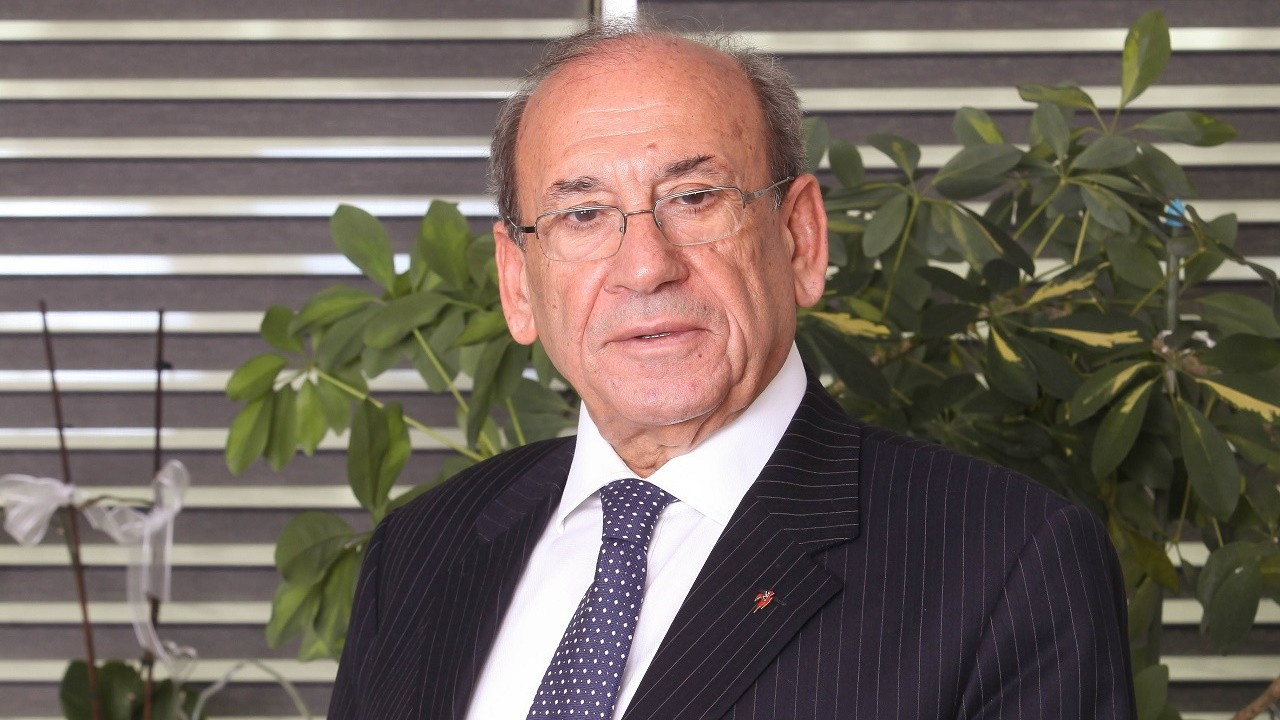 ● A professional life spent with Sarkuysan for 50 years … Can we get to know you starting from earlier?

I was born on May 10, 1943 in Kilis. The announcement of Sarkuysan’s legal personality is May 9, 1972. We were born 29 years apart. There is such a beautiful coincidence, a unity of destiny. I did my secondary education in Kilis. In those years I couldn’t even think of getting to this point. However, I was a very hardworking student. I always finished my school first. I had the opportunity to study in all departments of the university, but I chose the metallurgical engineering of the Technical University, then the fusion engineering … The reason was the opportunity for a scholarship. Since my grade was high in the first year, I received a scholarship from Ereğli Iron and Steel Enterprises. I also received a mutual scholarship from the Rabak company. With the scholarship I received from two of them, I had more money than a student could have.

After finishing the faculty, I started working in Rabak due to my compulsory service. In 1972, near the completion of the compulsory service, Sarkuysan (we know, the first syllables of the goldsmiths) wanted to start a similar copper business. I did an internship at the Finnish company Outokumpu and worked there for a while as an engineer. At that time, the jewelers who founded Sarkuysan also received an offer from the Finnish company Outokumpu to open a facility. When the Finns saw that none of the participants understood this matter, they said: “A Turk has worked with us, he knows this matter. Go and work with him.” After completing my compulsory service in Rabak, I moved to Sarkuysan with the advice of the Finns. Of course, I would like to work in the institution where I received a scholarship, but there were strict rules. I had to be 40 to be a manager. Rabak later went bankrupt. This year is our 50th anniversary as Sarkuysan.

“OK, WE HAVE FOUND OUR MAN”

● What was the first project you managed in Sarkuysan?

At the end of 73 I came to work with the title of assembly and operation manager. He would carry out the project of the German company Lurgi. They said they received offers from large companies. Enka, Alarko, Tekfen, Maksom … I have prepared a specification for 3 months to receive an offer. Then the tender was made, the offers were received. They invited me to the board meeting. The average bid from the 4 companies for the assembly of the incoming machines and their commissioning was $ 3.5 million and the estimated time was 18 months. I did the same job in Rabak. I’ve done my bill. I said, “Come on, don’t give it to them. I’ll do it for $ 450,000.” After a good fight, I convinced the management. “I will do this editing with my people and I will have the staff here work as operators.” I said. Long story short, we finished the assembly in 9 months and it cost $ 385,000. It was then that I managed to win the favor of the jeweler’s board of directors. They said, “Okay, we found our man.” It wasn’t easy for the conditions of the day. People should be commended for that. At that time, the jewelers had raised 100 million lire from the public. from 67 provinces. This capital was raised with the confidence of the jewelers. But for that capital to become operational in one place, an experienced person was needed. I was lucky enough for them.

● They handed over general management to you over a period of 10 years.

I am an engineer, the group I worked for was a trader. In 1983, when I was deputy general manager, the general manager resigned and I was offered the position of general manager. I was 40 years old. I was thinking that I should improve myself in finance and import-export. They said let’s give a power of attorney. I have served for 1.5 years. The company was doing well. There were 17 mortgages on the company from the previous CEO, I convinced the banks and removed them all. The point is to hold on to the work, to get to the core of the work. When they saw this, they were surprised at the end of 84. We celebrate the opening day of the business in December each year. Our late chairman of the board gave him his speech. “I have good news. Today I meet our new general manager.” He said. I thought someone new was coming. “Your new general manager, Hayrettin Çaycı …” We are very moved. Jewelers are also human money changers. well who does what.

AMERICA SOMETIMES INGESTS ALL YOUR PRODUCTION

● You also have facilities in America …

The group of traders who founded Sarkuysan wanted us to invest the capital and make money the next day. Of course, the realities of the industry are not like that. In the years when Rabak was the only gun, I started making special productions in the areas he had left. Sarkuysan has the ability to produce all kinds of quality copper. We can produce both oxygenated and oxygen free copper. A tender was opened at NASA in the United States. “We will make an offer for copper, which will be used on a spaceship and will contain 3 ppm of oxygen.” they said. “This is why we open 500-kilo races”. We won that race. We delivered the goods to them with 1ppm of oxygen, not 3ppm. It has expanded our market to America. We have been selling in the United States through reps for nearly 25 years. We later decided to start a company there. America can better value our technology products. In 2008, we opened our first American facility in Albany, the capital of New York City. Then we set up another one in Georgia. These are very important turning points in Sarkuysan’s history. America is a really big market, sometimes it swallows all your production, it takes a long time to satisfy it when it demands it.

● Can you tell us about your activities in civil society?

Like Sarkuysan, we attach great importance to international activities. We attended wherever fairs were held. We have also participated in international organizations. Executives from Rabak, the first institution in Turkey, who received an education abroad, were unaware of the London Metal Exchange (LME). I went to the LME first, learned how the price of copper is formed. After that, we went and stayed there for a week a year. We taught the industry what we learned there, we didn’t keep it to ourselves.

Subsequently, we joined the International Copper Council (IWCC) and started participating in its activities. One year I invited them to Istanbul. 400 international copper producers came to Turkey. I hosted them in the Çırağan palace. I did a Turkish entertainment program. I visited the Bosphorus and the Grand Bazaar. They left with such good feelings that they have become tourism ambassadors. I have traveled abroad many times with the late Özal. The increase in Turkey’s exports and imports began during the Özal period. “The state shouldn’t do everything, as a non-governmental organization, to create a foreign trade association that brings companies together.” he said. Founded in 83, Turkish Foreign Trade Association (TURKTRADE). I have been its president for 5 years. We discuss the import and export problems of the whole country and give suggestions to the government, to the ministries. Currently, we have officers in 6-7 commissions established between us and the government. Every day, after I finish my work on my shift, I reflect for an hour on civil society issues. I don’t mind doing it every day. I think I serve my country.

● Why did you invest in Bulgaria in Europe?

We were planning to open a facility in one of the new member states of the European Union. Both the cost advantages and the proximity to the market, etc. for reasons. Our friends have traveled to many countries and prepared a report. “Romania seems more suitable,” they said. At that time, the White Appliance Manufacturers Association made a trip to Romania. I also joined him. We visited the Arcelik facilities there. There I visited some other facilities of Turkish industrialists. I also got some information there. The Association of Romanian Turkish Businessmen also showed a lot of sympathy. “If you are Sarkuy, it is an important name. It will do us good too if he comes here. “They said.

About a year later, DEIK, of which we were on the board of directors, made a trip to Bulgaria. We are also present in the Bulgarian Business Council. They visited the factories in Shumen, Plovdiv and Sofia, especially those belonging to the Turks. Our friends suggested a 72 acre site with two buildings. “Overhauling buildings, setting up structures”. they said. It hit me so hard. Bulgaria’s numbers were better than Romania’s. Labor was cheaper.

● What would you like to say about your business philosophy?

In my Sarkuysan adventure, which is approaching 50 years, I have always adopted this motto: the result is indisputable until the cause is investigated. For example, when a topic is brought to me, they want to discuss the result. I say, “Wait a minute! Let’s investigate the cause without discussing the result.” It is a waste of time to discuss the outcome without going to the cause. Another understanding of mine is to separate the important from the unimportant in life. It’s the thing I care about the most in my life. That is, I give my hours when it is necessary, I do not spare 2 minutes for the unimportant. Also, in principle, I turned this company into a family business. Our employees and partners are our family. Imagine that there are 15 thousand members, there are a thousand employees. Therefore, there are 15 bosses for each employee. I connected this family to the company with a sense of belonging. There is great solidarity inside and I have dedicated my whole life to Sarkuysan to convey this sense of belonging to the company. Now I’m 79, I’m still a person who comes to work at 9 every day and works until 6pm and it doesn’t bother me at all.

There are no summer staff in Bulgaria

After opening a factory in Bulgaria, we encountered some surprises. Five years ago, the minimum wage was half that of Turkey. It is now one and a half times the size of Turkey. Energy prices were lower than in Turkey. It is now more expensive than Turkey. Worse still, there is no staff. When summer comes, the Bulgarians go to Germany and Spain and work there. We talked to the Bulgarian Prime Minister about the job issue there. We said we could bring him from Turkey, but we couldn’t even convince him. If we can find workers, we will increase capacity, which also benefits the Bulgarian economy. We are continuing our efforts to fix it.