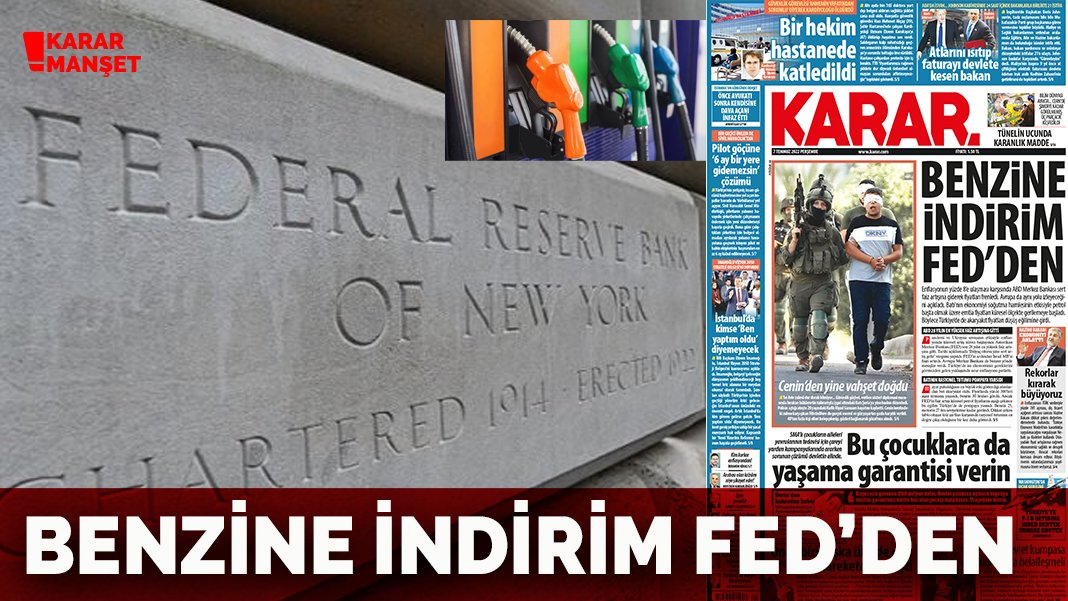 Faced with inflation reaching 8%, the US Federal Reserve held back prices by raising interest rates. He announced he would follow the same path in Europe. With the effect of the Western move to cool the economy, commodity prices, especially oil, have started to decline on a global scale. Therefore, fuel prices in Turkey have entered a downward trend.

When the global rise in inflation began with the effect of the pandemic and the war in Ukraine, the US Federal Reserve (FED) made the highest interest rate hike in the past 28 years. In the historical statement, it was stressed that “If there is a need, a strong increase will return”. After the Fed, the Israeli MB raised interest rates. The European Central Bank has given similar messages. In Turkey, however, the insistence on an approach that ignores the needs of the economy has caused inflation to explode.

THE RATIONAL ATTITUDE OF THE WEST REFLECTS THE PUMP

One of the areas where the cost of living had the greatest impact was fuel oil. There has been a price increase of more than 300 percent, gasoline has seen 30 lire. However, when the Fed’s hike in interest rates dragged down world oil prices, this trend was also reflected in Turkey. Petrol 25, diesel dropped to 27 pounds. The surprising picture once again showed that the rational attitude is the right way out in the face of crisis conditions.

DECREASE IN FUEL PRICE BY FED

A global pandemic and war, as well as concerns over the economic crisis, have set inflation records broken. Central banks around the world have drastically raised interest rates by applying a tight monetary policy to take measures against the crisis. Especially the European Central Bank (ECB) and the US Federal Reserve (Fed) have tightened interest rates. With the decision to cut interest rates, markets began to relax and commodity prices also dropped dramatically. Turkey benefited from these declines, but the decisions taken by the management of the economy could not stop the records of exchange rates and inflation. Therefore, the comfort of the FED and the ECB on the one hand and the decisions taken by the Central Bank of the Republic of Turkey (CBRT) on the other have led to an increase in the prices achieved in our country due to the exchange rate. Fed Chairman Jerome Powell signaled at last month’s meeting that there could be a rate hike of 50 or 75 basis points in July. Although the Fed’s signal of a 75bp hike in interest rates led to lower oil prices, it was also reflected in lower fuel prices. However, as central bank interest rate cuts in Turkey sent the exchange rate skyrocketing, the discount was reflected in a very limited way. Along with the Fed, concerns that rising energy prices could trigger a recession has led to sharp falls in oil prices. West Texas Intermediate (WTI) crude fell 9% to $ 99 a barrel on Tuesday. The barrel of Brent oil fell 11 percent on international markets to $ 102. In addition to the price of oil, metals also fell. Iron ore has collapsed amid concerns about a recession in the United States and expectations that the start of large-scale testing after new cases in Shanghai will reduce production. The commodity used in steelmaking continued its decline, approaching its lowest level since the beginning of the year, losing a third of its value from its peak of $ 166 in March.

THE GOVERNMENT OF NORWAY HAS ENERGETIC SHOT

The Norwegian government intervened in the strike launched by oil and gas workers. The Norwegian Ministry of Labor intervened and put an end to the strike amid fears that the strike would worsen the energy crisis in Europe. “Although the conflict can have such enormous social consequences for all of Europe, I have no choice but to intervene,” said Persen, Minister of Labor. Iudun Ingvartsen, the head of the Lederne union, where the workers of the oil and gas industry are organized, confirmed that the strike ended with the government’s decision and stressed that the workers will return to work as soon as possible. With development, gas supplies from Norway are expected to increase. According to the statement released by the Norwegian Oil and Gas Association, unions representing most of the energy workers in the country decided to strike because they could not agree on wages and went on strike to demand an increase in their salaries.

THE FED CAN ACHIEVE A 75 POINT INCREASE IN INTEREST

Fed Chairman Jerome Powell signaled at last month’s meeting that there could be a rate hike of 50 or 75 basis points in July. Powell and other Fed officials raised the policy rate by 75 basis points in June, the largest increase since 1994. Since then, some Fed members have said they are in favor of a 75 basis point hike at the July meeting to curb inflation, which is at its peak in 40 years. “We will be looking for clues about the indicators the Committee will consider to push for a 50 or 75 basis point hike,” said Jonathan Millar, Barclays Economist. The minutes can reinforce the opinion that the Committee gives priority to price stability ”. Powell pointed to the University of Michigan Inflation Expectations Survey at the news conference. Americans’ inflation expectation for 5-10 years was 3.3%, this rate was revised to 3.1% on June 24.

BRENT PETROL CAN DROP UNDER $ 70

According to Citigroup’s global commodities report, oil prices could drop below $ 70. Commodities peaked, but prices are expected to remain high in the second half of this year, according to Citigroup’s global commodities report released today. Analysts led by Aakash Doshi noted that if a tangible recession occurs, oil prices could drop below $ 70 a barrel. The bank also lowered its price targets for corn, soy and wheat for the next three months. Traders expect a significant deterioration in demand for animal feed and crop-based biofuels over the next 6-9 months. In the short term, supply uncertainty continues.

With the Fed and ECB’s sharp hikes in interest rates, oil prices fell and the domestic hike was reversed. Fuel prices, which entered a downward trend before the holidays, made travelers happy. After the discounts, information has come from industry sources about the arrival of a gasoline hike. After the sharp decline in Brent oil, the 96-cent increase in gasoline was canceled. After the subsequent large discounts on the price of diesel at the end of June, a discount of over 2 TL was made on the price of gasoline on 2 July. In this context, the expected increase in the price of petrol was canceled, while diesel returned to the discount line. According to information obtained from industry sources, diesel prices are expected to drop by $ 50 per tonne overseas. 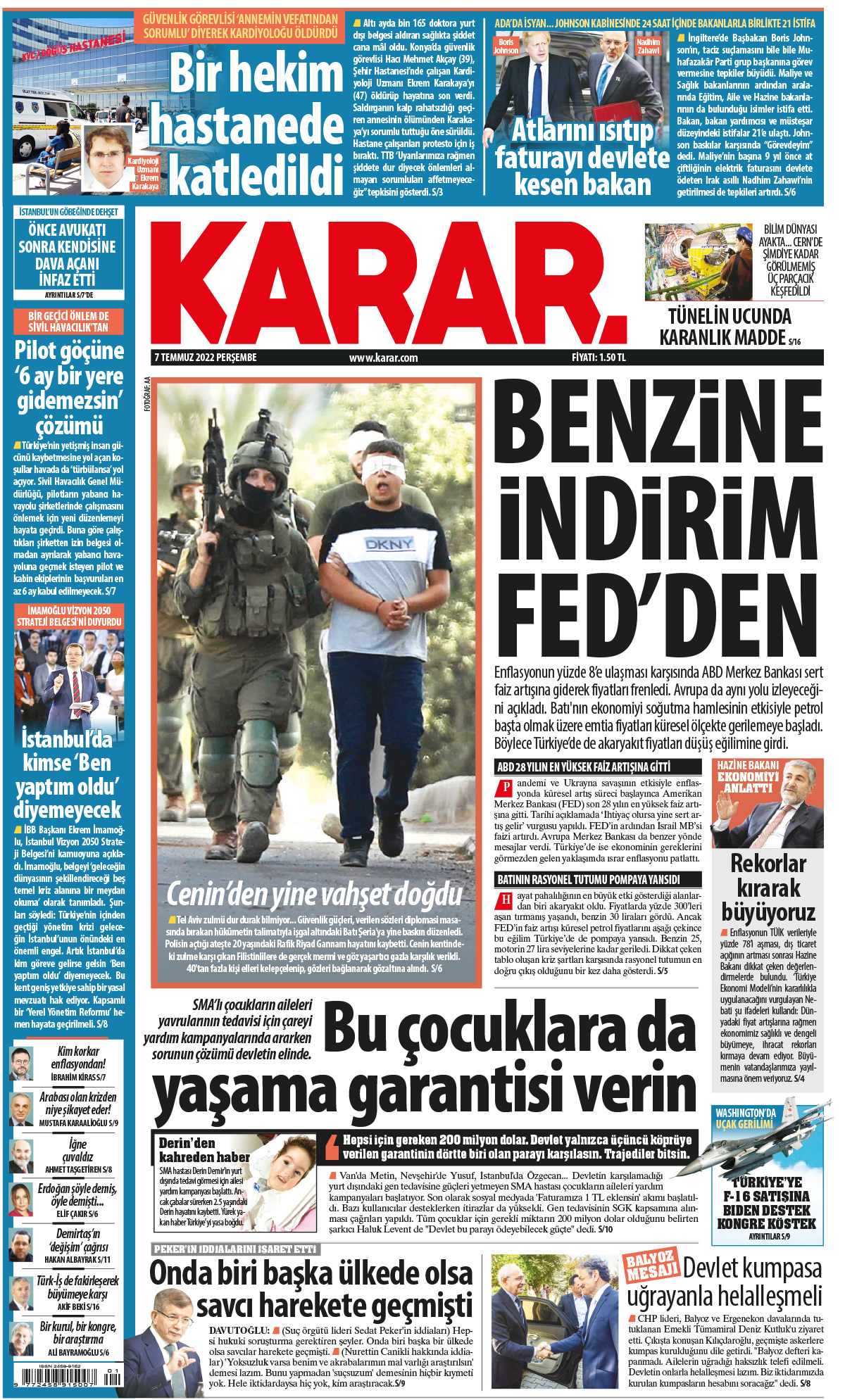