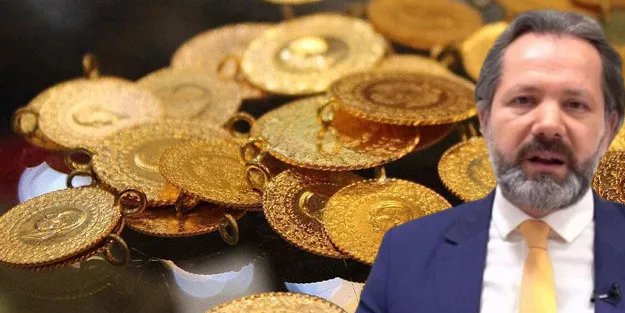 The rise of gold will continue, what is the latest dollar situation? Financial analyst Islam Memiş said the markets turned to the US and drew attention to the Fed’s signs of rising interest rates. Saying year-end gold predictions still hold, Memiş warned those who will get married next year. Saying “There is a crisis in the world,” Memiş said “We can see differences in gold prices” and provided data for the end of the year.

Beware of gold investors! Islam Memiş said that there were strong decreases in investment instruments against the dollar during the crisis which was effective around the world, but this was not true for gold. “Which is cheap and which is expensive?” Claiming that he should have thought about it, Memiş recommended “manipulated investment tools” for investments.

Gold will fall further, how much will the dollar be, what is the latest situation in Bitcoin? Answering questions about the market, financial analyst Islam Memiş said that the price of gold will continue to rise even if it is suppressed by the Fed. Memiş said an estimate of 1,400 TL per gram is valid for the end of the year.

“WHICH IS CHEAP, WHICH IS EXPENSIVE?”

Pointing out that there have been strong declines in investment instruments versus the dollar, Memiş explained the points that investors should pay attention to. Memiş, “Which is cheap and which is expensive, pay attention to this. The investor will either trade the expensive for the cheap or buy the cheap and protect their assets,” he said.

Stating that there is pressure on all commodities versus the dollar, Memiş recommended manipulated investment tools for the investment.

“THE ESTIMATED GRAMS OF GOLD AT YEAR END HAS NOT CHANGED”

According to the news reported by turkiyegazetesi; Gram gold is powered by both dollars and ounces. It is currently down due to pressure on the ounce gold price. They will have a wedding next year, those in debt can use this as a long-term opportunity. My estimate of 1,400 lire per gram of gold at the end of the year has not changed. I see manipulated prices on all instruments against the dollar. I give priority to these investment tools “.

“THE BEGINNING OF SEPTEMBER HAS ARRIVED IN THE MARKETS”

Saying, “September came to the markets early,” Memiş said, “central banks started taking the stage a week before the arrival of September,” stating that investors are switching from holiday mode in July-August to a process in which they focus on their goods and markets.

Stressing that the stagflation process will begin after the recession, Memiş said: “We will now see the reflection of the recession on prices and markets. The energy crisis is burning Europe. Europe will feel this crisis more in the last quarter of the year. There will be a corporate quagmire. We will be talking about very different developments in global money markets starting in September, “he said.

“I SEE DIFFICULT FALLS UNDER GRAM”

Islam Memiş’s technical assessment of the gold price trend is as follows:

I hardly see the drops below grams, especially below one thousand TL. We can see peaks. Gram gold can be 1,200 TL and therefore 1,450 TL. Those having a wedding next year should make good use of the next few weeks. There is a world crisis. We can see differences in gold prices. Especially at the end of the year. It is also very important that our citizens do not borrow money in gold. ”

Silver is cheap enough in Turkey, cheap enough in the world. It’s a miracle to me that the price is $ 19 against such high inflation. Especially the fact that one gram is currently at the level of 11 lira in Turkey is a miracle for me. “I can’t buy gold, I can’t save gold. Here it’s more than a thousand lire. Before we could have bought at least a few grams, we could have saved it, but we can’t buy it anymore.” Silver point to our citizens who say. I’m talking about a commodity that costs 11 lire per gram. In the first quarter of 2022, the most profitable commodity relative to gold was silver. However, the ratio was again put under pressure with this increase resulting from the gold-silver ratio. Of course, history will repeat itself. Now, when gold prices are too high, our people who go to weddings, engagements and circumcisions buy gold for jewelry because of our customs and traditions. But in today’s conditions, jewelry has dropped to 0.25. In other words, it dropped to 250 lire in value. Therefore, to avoid embarrassment, “They wore gold, I must wear gold too.” he is forced to buy gold with his mentality or the thought of him. But in the event that it was not possible to buy gold, people began to increase more.

‘SILVER IS NOT JUST AN INVESTMENT INSTRUMENT, IT IS A PRECIOUS PRODUCT’

There is a world economy that is going through global warming and drought, there is climate change. Therefore, it also indicates a time when the world and countries will use rain bombs a lot. However, physical silver is still needed when using rain bombs. It is made with physical silver. The other reason is the change of season, there are serious changes in the investments of countries related to drought. For example, countries in the Middle East have given serious weight to solar panels. Mainly China and other Central Asian countries and Middle East countries. China manufactures facial recognition systems. Use physical silver and install solar panels. In the Middle East, for example, Saudi Arabia, in the first place, will fill all lands with solar panels to bring that desert environment into the economy rather than generate income, and they will sell this electricity income again as an energy sector, and to do this you need physical silver. Therefore, silver is not only an investment tool, but also a valuable asset.

‘THE DECREASE IN OIL PRICES WILL NOT BE PERMANENT IN THE MEDIUM AND LONG TERM’
Now so; Fluctuations in oil prices are very effective here. Sometimes a sharp drop in pump prices is reflected in a sharp rise from time to time. Of course, as the dollar exchange rate is very unstable internally, the possibility of prices settling down also weakens. We see a drop below the $ 100 level in oil prices. In fact, we see a depreciation of 4% to 5% on a daily basis. But as the dollar goes up after a day, we can’t see this price difference in pump prices because we buy with dollars. When we look at prices between other processed and unprocessed oils, namely Brent oil and crude oil prices, they make excellent use of the difference between falling oil prices and the price of Brent oil and crude oil. However, I am someone who does not foresee that oil price declines will be permanent in the medium to long term. Oil prices are more focused on foreign policy developments. It indicates a process that OPEC members prioritize a little more.

‘I EXPECT DOLLAR 130-140 LEVELS IN BRENT OIL’
Again, I am waiting for the $ 130-140 levels. Of course, the discount is in very difficult conditions, because a cost calculation is carried out. But when the exchange rate goes up or the price of gasoline goes up, the price increases start happening one after another, that second, that minute. I don’t think anything can be done about oil prices. Of course, the government sometimes tries to do something about measures and precautions. But this is not a sustainable policy. Because rising oil prices, rising food prices, rising costs, rising prices of anything in the world negatively affect the entire economy. And therefore, as long as we continue to buy oil prices in dollars, unfortunately, reductions will be impossible.

‘FED ​​IS THE MAIN AGENCY OF THE FALL OF CRYPTO COINS’
Cryptocurrencies are under pressure. This is due to the FED. The harsh losses continued after Fed Chairman Powell spoke. As of now, it is at the $ 19,000 840 level. There is a 4% decrease in value. Bitcoin and cryptocurrencies started the week with a 4% depreciation. The Fed has a lot of influence here. And so, when you consider this effect of the Fed, this manipulation continues a little longer. I continue to follow the $ 18-22,000 range. But for the medium to long term, I see a very high probability of continuing to increase in value.