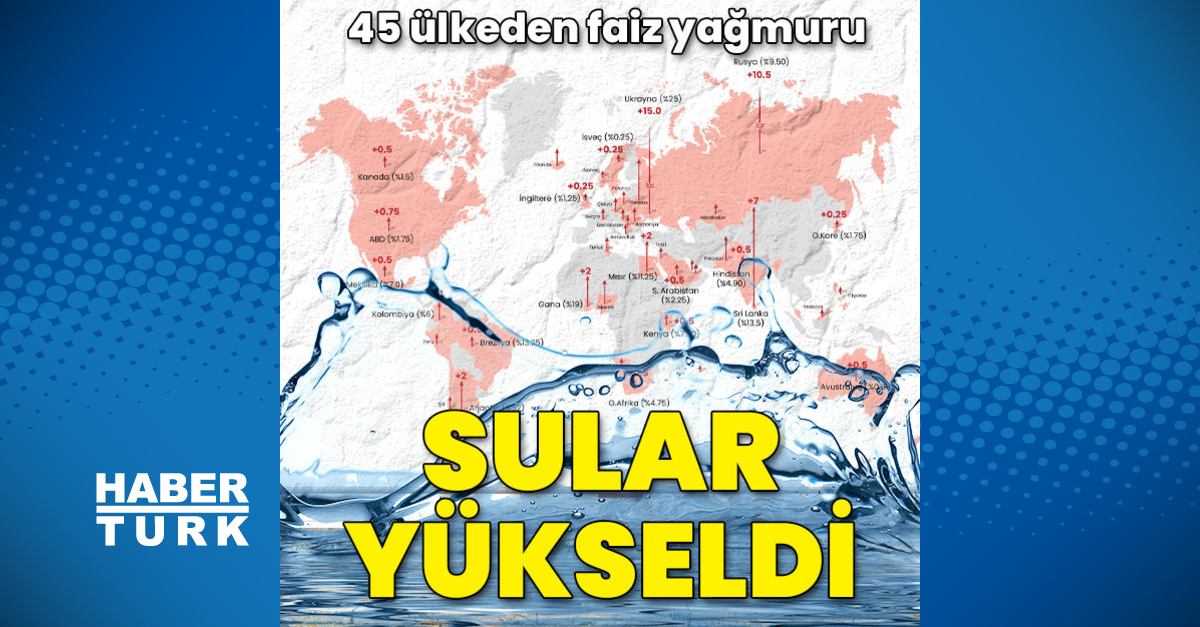 The main market agenda this week was the Fed’s rate hike. On Wednesday evening, the Fed hiked interest rates by 75 basis points for the first time since 1994, to curb rising inflation. . Thus, while the policy rate was pulled in the 1.50-1.75 percent range, Fed officials predicted that the interest rate would rise to 3.4 percent by the end of the year.

The Fed decided to increase by 25 basis points in March and by 50 basis points at the May meeting. Inflation, which peaked at 41 years in the US, was effective in the Fed’s latest decision. On Friday it was announced that annual US inflation rose to 8.6% in May. The market expectation was that inflation would reach 8.3%. Rising food, energy and housing prices contributed significantly to rising inflation.

Twenty-year course of US inflation:

But inflation problems aren’t just about the United States. While there has been no recovery in the supply chains that deteriorated after the coronavirus outbreak, Russia’s attempt to invade Ukraine came this year. With the effect of the war, there have been significant increases in the prices of energy and all raw materials.

LEAVENED IN OIL AND FOOD

The price per barrel of Brent oil rose 53% in 2022, topping $ 120 due to supply concerns. The FAO Food Price Index, which measures the change in global food prices, rose 22.8% year-on-year in May. Food prices are not expected to fall anytime soon due to the ongoing war between Russia and Ukraine, which are among the world’s leading suppliers of cereals and fertilizers.

A SURPRISE AFTER 15 YEARS

Finally, yesterday, the decisions to hike interest rates came from England and Switzerland. The Swiss National Bank (SNB) surprisingly raised the policy rate by 50 basis points. This was the bank’s first rate hike since September 2007. According to the SNB’s statement, the benchmark interest rate was raised from -0.75% to -0.25%. Market expectations were that there would be no change in interest rates.

5 INCREASE IN A TIME

After Switzerland, the Bank of England raised the official rate by 25 basis points to 1.25%. Therefore, the bank has decided to raise interest rates in five of the last five meetings. The text of the decision underlines that the bank will continue to be on alert despite the inflationary effects.

A FIRST AFTER 22 YEARS

THE WAVE SPREADED IN MAY

In many major economies, the interest rate decision for June has not yet been announced. After the Fed rate hike last month, the hikes came one after the other. Immediately after the Fed, the Brazilian Central Bank rose by 100 basis points. Central banks in Saudi Arabia, Qatar and the United Arab Emirates also made decisions to hike 50 basis points in May.

As can be seen in the graph above, the biggest rate hike decisions of the year stemmed from the war between Russia and Ukraine. The Russian central bank raised interest rates by 1050 basis points to protect the value of the ruble immediately following the attempted invasion of Ukraine in February. However, on 10 June the bank finally reduced by 150 basis points. With successive cuts, the official rate returned to the pre-war period with 9.5%.

FIGHT AGAINST INFLATION IN UKRAINE

The Central Bank of Ukraine, on the other hand, raised the official rate from 10% to 25% two weeks ago to stop the currency depreciation and curb the rise in prices. Therefore, the official rate reached its highest level since September 2015. The Ukrainian Central Bank pointed out that annual inflation rose to 17% in May and said it could double this year due to the war. This is why he stated that the rate hike has become mandatory.

The ECB STARTS IN JULY

As the interest rate hike storm continued around the world, eyes have been on the European Central Bank (ECB), which has not yet pulled out the interest weapon. Annual inflation in the euro area reached an all-time high of 8.1% in May. Finally, at its meeting on 9 June, the ECB kept the policy rate unchanged at 0 per cent. However, in July it announced its “intention” to raise interest rates by 25 basis points.

CBRT DID NOT MAKE A MOVE

While these are happening around the world, the Turkish Central Bank has implemented a “wait” policy so far this year. The Central Bank, which reduced the official rate to 14 percent with a 500 basis point cut from September to December 2021, did not touch the interest rate in the first 5 meetings of this year.

Finally, while the interest rate was kept constant on May 26, the text of the resolution stated: “A comprehensive process of reviewing the policy framework continues which encourages permanent and strengthened liralization across all CBRT policy instruments in order to institutionalize the price stability in a sustainable way. “

Annual inflation in Turkey rose to 73.5 percent in May.