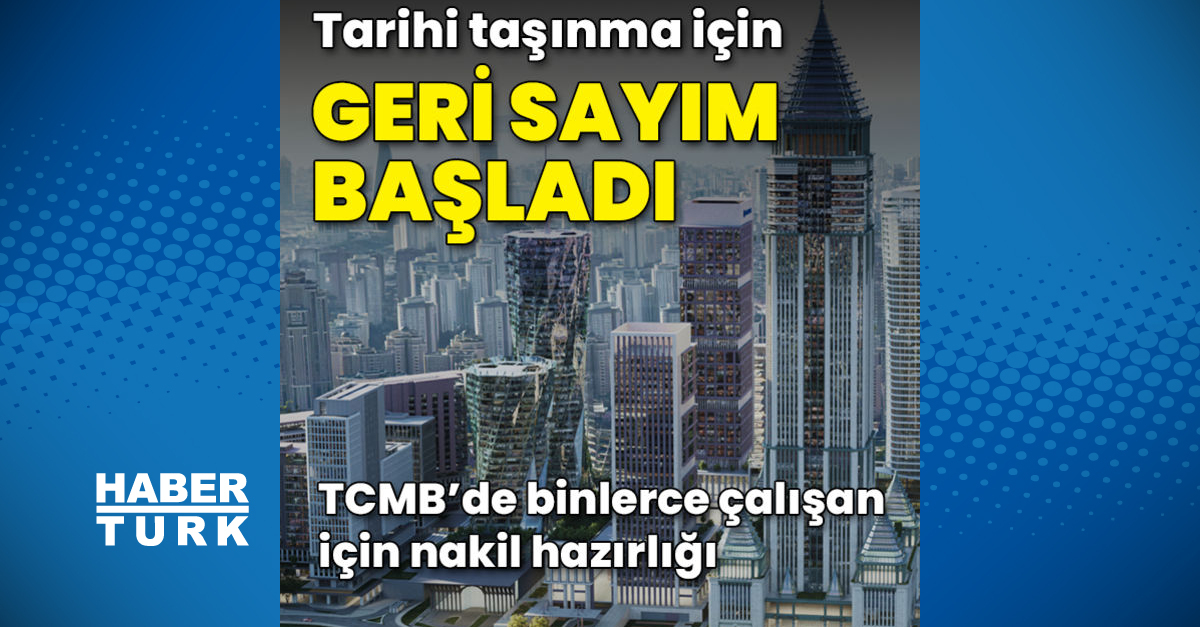 Countdown to the historic move

Established in 1930, the Central Bank of the Republic of Turkey is preparing to relocate its headquarters outside Ankara for the first time in its history.

As the construction of the 60-story Central Bank Tower, which will be located in the Istanbul Financial Center, proceeds rapidly, the Bank has sent a message to the heads of the relevant units and asked employees to communicate the dates of the transfer by 5 July.

The message sent by the Central Bank’s Human Resources Directorate General informs that the transfer date of employees with school-age children will be set until September 1, 2022 and of those who do not have until September 30, 2022.

2.118 PEOPLE WORK AT THE ADMINISTRATIVE CENTER

According to the Central Bank’s 2021 annual report, the bank had 3,623 employees at the end of last year. 58.46 percent of them, or 2,118 people, work in the headquarters. Thus, the transfer from Ankara to the Istanbul Financial Center affects 2,118 people. Although the location has been moved, there is no official statement regarding the relocation of all existing Ankara employees to Istanbul. However, the vast majority of employees should come to Istanbul.

Article 3 of the Central Bank Act, accepted by the Turkish Grand National Assembly on 11 June 1930 and published in the Official Gazette on 30 June 1930, stated that “The seat of the bank is in Ankara. The meetings of the General Assembly and the board of directors are held in Ankara “. The headquarters of the Bank is still referred to as Ankara in Article 2 of the Central Bank Act currently in force. It is expected that this article will be amended in parallel with the official start of the relocation process.

THERE WILL ALSO BE BRSA AND CMB OFFICES

When the Istanbul Finance Center (IFC) located in Ümraniye is completed, in addition to the Central Bank, the Banking Regulatory and Supervision Agency (BDDK), Capital Markets Board (SPK), Stock Exchange Istanbul, Ziraat Bank, Halkbank, Vakıfbank, Turkey Insurance and İŞ GYO offices will also be included in the project.

THERE WILL BE 75-100 THOUSAND EMPLOYEES

According to information on the IFM website, the project will include 1.4 million square meters of offices, a 100,000 square meter shopping mall, a 2,100-person convention center, a 30,000-square-meter 5-star hotel and a car park with a capacity of 26 thousand vehicles. Once completed, IFC will host between 75 and 100,000 employees on a daily basis.

The 60-story CBRT Tower, with a construction area of ​​approximately 300,000 square meters, will be the tallest building in Turkey, according to information provided by IFM. In addition to the offices, the building will have various functions such as conference room, museum, library, restaurant, sports fields and winter gardens.

THE PROCESS OFFICIALLY STARTED IN 2009

First, in 2007, plans were announced to create a financial center to allow Istanbul to compete with centers such as London and New York. In 2009, the decision on the strategy and action plan of the Istanbul International Financial Center was published in the Official Journal. Thus, the process has officially begun.

It was announced that the first IFC would be completed in 2016. However, this date has been postponed 3 times due to interruptions in the bidding and construction process. Finally, it was announced that the project would be completed in 2022. The Turkey Wealth Fund announced in September 2019 that it had taken over 465,000 square meters of the project, which has a usable area of ​​1.3 million square meters, for 1 TL 670 million, including the project, excavation, land costs and construction costs completed so far.

Finally, AA said in its June 11 news report that 81% of the IFC has been completed and that rentals are expected to begin shortly.

Also, last week, the Istanbul Financial Center Bill was accepted by the General Assembly of the Grand National Assembly of Turkey and became a law and went into effect. According to this law, streets, squares, green areas, parks and similar areas reserved for public services, with the exception of the operation and management of all infrastructures and superstructures, the leasing of sections and autonomous areas, and the assigned areas to the bodies in charge in line with the functions established in the urban plan. All site management activities of all kinds will be carried out by the management company for 20 years.

In the first period of IFC’s operation, the corporate tax discount rate for profits obtained from the financial services export business carried out at IFC between 2022 and 2031 by financial institutions that have received certificates of participation in order to encourage relocations and making IFC competitive on a global scale will be applied at 100%.