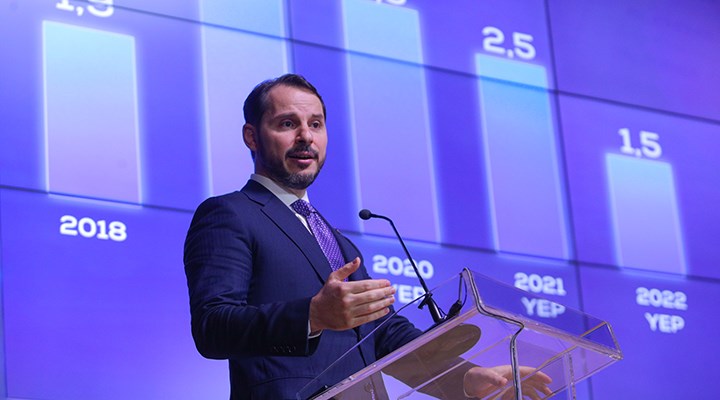 Small networks of interests established at the bottom, just like a stone thrown into the water, grow ring after ring. If the rings of the latest stock market scandal can be resolved, the landscape will clear up. Let’s take a look from top to bottom.

“Our brother İrfan is our dear brother, nurtured by the origins of Milli Gorus, whom we have known since the ’87, and with whom we grew up in the Hakyol organizations in Ankara Siyasal … We must not sacrifice our brother İrfan, whose loyalty to our cause that we have known for 30 years, to a plot that involves parallelism. They are using your name. Our brother İrfan’s position is as follows: “We will obey whatever the will of our President”. I ask for your special attention … Your brother Şenol.

This heartfelt message, sent on February 4, 2016, was in the emails of Berat Albayrak, known to the public as the “Berat Box”, and posted by “hackers” on the Internet. Necdet Kardan’s CV was added to another message sent in the following days.

More glaring issues were on the agenda at the time. However, these messages haven’t attracted much attention. However, as we talk about the stock market scandals, we understand how important these names are. Because Şenol Duman and Necdet Kardan, the holders of the “Brother Şenol” signature, are today the deputy general managers of the İstanbul Stock Exchange. Who is the “brother Irfan” in the message? His final address is the Next Level, which is said to be the center of corruption in public offerings.

We’ll take a look at this team’s stock market stories in a moment. But first, let’s briefly recall the management of the Istanbul Stock Exchange.

The shop windows are well known. First of all, Albayrak’s thesis teacher, Prof. Erişah Arıcan. Yunus Arıcı was the chairman of the state supervisory board during the Albayrak ministry. Metin Kıratlı, who has recently been on the agenda with his torpedo assignments to his son, daughter, son-in-law and wife, is part of Saray’s squad. Another Saraylı is the propaganda officer Fahrettin Altun. In other words, stock market management is like the Albayrak-Erdogan government. However, those who carry out technical work are those who are close to Albayrak.

Necdet Kardan, whose CV was sent in 2016, was Information Technologies Manager of Çalık Holding. İzzet Serhat Demir, who sent the CV to Albayrak, was also the head of the legal department of the same company. Now under the management of Turkcell. Şenol Duman and İrfan Güvendi, whom he calls “our brother İrfan”, come from agricultural credit unions. When the problem comes to Tarım Kredi, we need to take a break. Because we are immersed in strange business relationships that cannot be easily overcome.

I have provided detailed information on the billionaire branch of Tarım Kredi, Gübretaş and Razi Petrokimya, purchased in Iran for $ 700 million, several times before. Let’s skip a short trailer.

The liquidation of a company called Raintrade, created to export Razi fertilizers to foreign markets, without doing any work; The Negmar shipping company, founded together with the Nesma Group of Saudi Arabia, and many other shipping companies have come together under it; ferry and Ro-Ro transport, Istanbul Lines etc. and then the works that date back to the days when Binali Yıldırım was the head of IDO… If you examine the issues centered on Gübretaş from head to toe, from the beginning of the ‘Gemicik curiosity’ to today, what comes out of it?

Remembering recent events is enough for a collective assessment. The two giant ships that Gübretaş bought from South Korea in 2015 with an investment of $ 100 million went hand in hand and joined Burak Erdogan’s shipping company in 2021. Former Diyarbakır deputy Mehmet İhsan Arslan, one of the closest names to President Recep Tayyip Erdoğan, has been named Razi’s vice president in Iran. The real ‘inside’ apocalypse these days is in the Söğüt gold mine in Bilecik. The transfer of this gold mine to Koza Gold with a 2% stake during the time Güvendi was head of Tarım Kredi created controversy. On July 15 Koza was seized and the mine was returned to Gübretaş. Gübretaş shares broke a record when it was announced to the stock market that at the end of 2020 there were 3.5 million ounces of reserves here. It was a coincidence that Oğuzhan Şahinkaya, a former math teacher who owns educational institutions in Bursa, started collecting Gübretaş shares when two years ago he was at the bottom of 3 pounds and his share had reached 8.7 percent. . When the reserve was announced, the share price skyrocketed to 76 lire and the math teacher had a fortune of 2.2 billion lire. The AKP government often creates these “little miracles”. Some teachers are beaten and pepper sprayed in the Capital, while others enrich themselves using their knowledge!

Let’s not prolong it. The Gübretaş case is a well of gayya that has spread over the years. Güvendi and Duman are the top management of the companies during the busiest days of the tariff. Despite the message “We protect Hakyolcu, we protect” Albayrak sent by Duman, Güvendi was fired after Faruk Çelik became Minister of Agriculture. Behind the scenes, the reason was said to be the AKP-Community conflict. The Steel Front was spreading the information that Albayrak had been fired at his request. The question of who is from which team becomes irrelevant at the end of the day when people are the losers.

In fact, Güvendi recently appeared in the public offering of Pacific Construction, the Next Level AVM contractor, which Peker disclosed with his document and claimed that the public offering fees had been paid. Pacific GYO, listed on the stock exchange when Ali Fuat Taşkesenlioğlu headed CMB, raised 1.1 billion lire and became the fifth largest public offering of the year. Previously, he had offered the public Orçay, the producer of the teas that Erdogan threw at his rallies. Güvendi was included on the board of both of them when they were opened to the stock market.

Remarkable is the parallelism between the changes in the management of the stock market and the explosion of public offerings in the last 3 years and the past ingenuity of the managers. Speaking with Cumhuriyet’s Barış Terkoğlu, Hakan Atilla said he saw a counter similar to the Istanbul Stock Exchange, followed by Halkbank, and stepped down to avoid the public offerings placed in front of him, although he did not explain clearly “Not I found their way of doing business the right way. ” Quite implied actually.

You know, there is an anecdote about the last period of the Ottoman Empire. They named Abdülhamit’s last grandson, Ertuğrul Osman. People were saying “Oh my god”; “When everything is over, we start over”. We don’t know if Atilla said the same thing when he saw the team. But the scene that emerges with the new scandal looks like this: in 21 years, the interests of different cliques that have come to life in the same habitat have become so symbiotic that they always have to coexist. At the bottom, the small associations of interest grow ring after ring, just like a stone thrown into the water. While there are gears that sometimes don’t work properly or out of place, we’re looking at a regularly functioning money counting machine from top to bottom in every area.