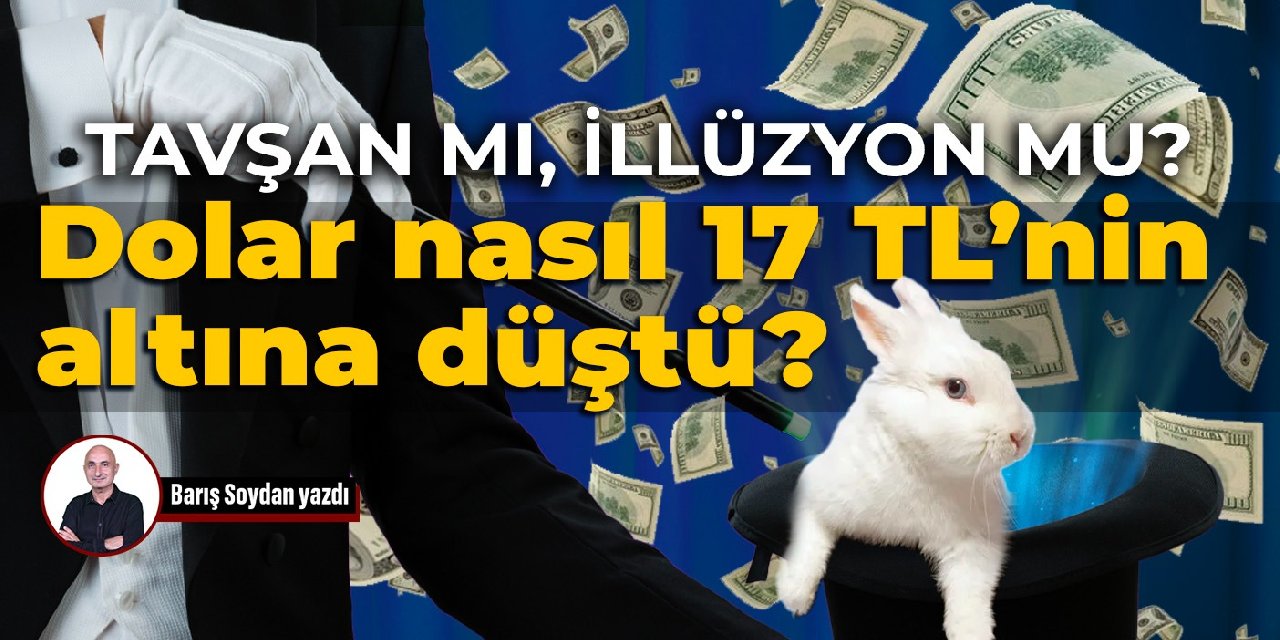 The last rabbit out of the hat is aimed at small and medium-sized businesses “If you don’t break your foreign currency deposits, you can’t use a bank loan” was the decision. As a result of the decision announced by the Banking Regulatory and Supervision Agency (BDDK) after yesterday’s market close, the dollar fell from TL 17.4 to 16.48. It continues to stay close to 16.9 below 17TL in the shallow market over the weekend … So a real rabbit has come out of the hat? Or are we looking at the magician’s latest illusion?

Before answering this question, let’s take a look at what happened last night, how the dollar fell to 16.48 at the end of the round …

The bosses of SMEs, who left their jobs wearily last night, read the BRSA decision, which was written in a very technical way, as soon as it was published, and rushed into internet banking. “sell” Could they have given the order? In the famous words of İsmet İnönü, “Come on”.

Central Bank reserves were in effect last night, as it probably was the night of December 20 when the Currency Protected Deposit was announced.

It is estimated that $ 14 billion from Central Bank reserves (HSBC Portfolio account) were sold to the market in May. Foreign exchange sales continued this month as well, and the Central Bank’s net reserves fell to $ 7.4 billion last week. This figure represents the lowest level in the last 20 years. Excluding foreign exchange borrowed from other banks and central banks of other countries through swaps, reserves are at the level of – (minus) $ 53.8 billion.

The number of companies not using bank loans in Turkey has decreased in recent years. Therefore, yesterday’s PMI decision, “Or deposit or loan in foreign currency” he will be faced with a dilemma. We will see many of them selling some of their currency in the next few days. So, will this decision make the dollar fall? Is this the rabbit the market has been waiting for?

No. Because a significant part of foreign currency deposits is not in small businesses but in large corporations. Since Finnet 2000, I have removed the companies with the largest foreign exchange position surplus.

As can be seen, the remainder of foreign currency deposits is in the hands of large corporations. The management of the economy believes that their demand for currency is due to real needs, while that of small and medium-sized enterprises is due to speculative purposes, so they have imposed the ban on SMEs. So the dollar was growing because of small and medium-sized businesses? Have we found the culprit?

Inflation rises to 100 percent, the current account deficit rises to $ 50 billion. TL was the currency that lost the most this year, because there is nowhere else in developing countries where inflation is this high.

Add to this the financial and political risks of Turkey, the fact that the central bank’s reserves are less than $ 53.8 billion, excluding swaps, and that Turkey could get into a new quarrel or even a heated conflict. with either country at any time. Like a strawberry, put the fact that the official central bank rate is 14 percent, so no one wants to keep their money in TL.

In such a country, waiting for the dollar to drop by placing a lending ban on SMEs is nothing more than a mirage.