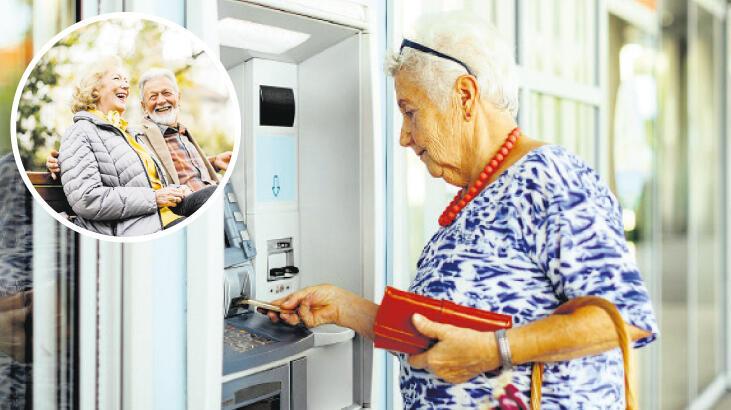 MİTHAT YURDAKUL – After the increase in pensions, even the banks that want to evaluate the pensions on account have taken steps to promote it.

While promotional payments for SSK and BAĞ-KUR pensioners reach up to 8,000 lire, pensioners whose contracts have expired look for the most suitable promotion conditions in the banks. Banks are looking to attract customers with opportunities such as one-click full retirement withdrawals, promotions and spending points for their current monthly customers.

Banks, which want retirees to collect their pensions themselves, make advance promotion payments proportional to retirees’ pensions. In addition to cash payments, some opportunities are also provided to retirees with point requests and special loan interest. While retirees whose contracts have expired for the promotion commitment, which is generally determined in three years of retirement pension, are researching for new banks, retirees whose promotion efforts continue also want to take advantage of new opportunities to promotion.

Bank changes can be made via the Internet and the mobile branch of the bank or via e-Government by going to the nearest bank branch with the ID showing the ID number of the Turkish Republic. There is no penalty for changing banks in retirement. However, retirees whose monthly purchase promotional contract continues, when they want to transfer their pension to a new bank, must repay part of the payments received upfront for the promotion period. For example, a retiree who receives a promotion of 3 thousand lire in advance for three years, wants to change banks before this period ends and has to pay back an average of one thousand lire. People in this situation compare the amount they have to return against the promotion they will receive under the new contract. In many cases, the benefits of the new banks go beyond paying the leftover commitment from the old promotion.

Which bank offers what?

The promotions offered by some banks to retirees are as follows:

ING: With a 3-year monthly non-carrying commitment and without any other service obligation, monthly amounts up to 1500 TL 4,650 TL, one thousand 500 TL between 2 thousand 500 TL 5 thousand 800 TL, monthly over 2 thousand 500 TL 7 thousand TL cash promotion. In addition, for each pensioner referred to the bank, an additional payment of 250 TL per person can be received, for up to 5 people. The amount of the promotion thus reaches 8 thousand 250 lire. In the event of a breach of the three-year commitment undertaken by the bank to receive the monthly pension, the promotional portion is recovered on a daily basis (daily), taking into account the residual time of the commitment.

BBVA WARRANTY: In exchange for a 3-year commitment, monthly purchases of 4,850 TL for 1,500 TL, 6,000 TL between 1,500-2,500 TL, 2,000 TL and 7,250 TL for those on top receive a cash promotion. With the special menu prepared for retirees in paramatiks, the bank offers the possibility of withdrawing the entire salary with a single click, up to one coin. The loan opportunity is also provided for retirees with an interest rate starting from 2.64%. If the commitment is broken, the cash promotion is requested daily.

BUILDING CREDITS: With a 3-year commitment you pay a promotion of 4 thousand 850 TL for those who earn up to 1 thousand 499 TL per month, 6 thousand TL between one thousand 500 TL and 2 thousand 499 TL, 7 thousand 250 TL for those over 2 years old one thousand 500 TL. If two new payment orders are issued within 60 days, you can receive an additional cash reward of 100 TL. Customers who have purchased a credit card for the first time or who have not spent money with the current card in the 3 months prior to the promotion date; After spending 500 TL in total after the campaign, an additional 150 TL cash promotion is received. The amount of the promotion can therefore reach 7 thousand 500 lire.

İŞ BANK: SGK pensioners (Pension Fund, SSK and Bağ-Kur), who receive their current salary from İşbank, who prefer İşbank for the first pension payment, or who transfer the current pension to the bank as part of the campaign valid from June 27 to 30 September 2022, they are entitled to a pension. receives promotions up to 5,000 TL. 3 thousand 500 TL for 1 thousand 499 TL, 4 thousand 250 TL for monthly 500 – 2 thousand 499 TL, 5 thousand 000 TL for 2 thousand 500 TL and more. It is also defined Pazarama MaxiPuan up to 500 TL for those who turn to retired acquaintances for retirement.