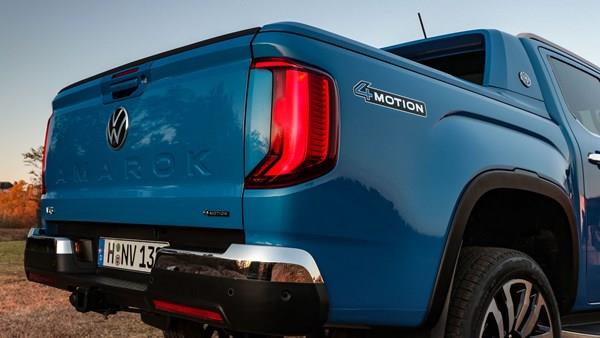 Volkswagen Amarok 2023 of the new generation, was fully revealed today after a long teaser campaign. As an infrastructure (stair frame), the Ford Ranger sibling model reveals its difference with its unique design. The refurbished pickup will be sold in Amarok, Life, Style, terrain-focused PanAmericana and luxury-focused Aventura trim levels.

What does the Volkswagen Amarok 2023 offer with its features?

The 2023 Volkswagen Amarok offers a very muscular look in general terms. While we see a design that creates an “X” shape in the front section, the standard matrix LED headlights surrounded by daytime running LEDs are among the details that directly draw attention. At the rear of the revamped pickup, vertically positioned stops and a large Amarok lettering draw attention.

The wheelbase of the second generation Amarok reached 3270 mm, an increase of 175 mm over its predecessor. The German manufacturer points out that this creates more space for rear passengers, especially in the layout of the double cabin. In addition, the overall length reached 5350 mm with an increase of 96 mm. The width of the new Amarok is 1910 mm (+34 mm) and the height is 1888 mm (+10 mm).

The increase in height, depending on the preferred wheel and tire combination, is not the only feature that makes the Volkswagen Amarok 2023 more capable in the field. In addition, the front and rear overhangs behind the tires have also been shortened in the new generation. The pickup approach and departure angles were announced as 29 and 21 degrees respectively, and the pickup fording height increased from 500mm to 800mm.

The 2023 Volkswagen Amarok has a towing capacity of up to 3500kg and a load capacity of up to 1160kg, depending on which engine is preferred under the hood. The roof of the revamped pickup can also carry 350 kg of static load. This allowed the German manufacturer to add the four-person roof top tent to its list of options. In addition to this, there are also many accessories in the list of options such as the hard case lid, protection bar and snorkel, which offer an SUV look.

The interior of the new Amarok has also been completely renewed. In the area reminiscent of the Ranger in layout, the vertical screen size in the center varies between 10 inches and 12 inches depending on the hardware level. The system is controlled by Ford’s SYNC4 operating system, but offers Amarok-exclusive graphics. Apart from this, the model, which differs from its twin with the Ford logo, with leather steering wheel, digital display (8 or 12 inches), graphics, buttons on the center console and gear knob, is equipped with Harman electronic parking brake Kardon audio system at higher equipment levels and electrically adjustable seats in 10 positions.

Under the hood of the new Amarok are petrol and diesel engines. The pickup, which opened with a 2.0-liter TDI diesel engine producing 148hp in the African market, will receive 168hp from the same engine in other markets. The more expensive bi-turbo four-cylinder diesels will deliver 201hp or 207hp.

At the top of the diesel models will be a 3.0-liter V6 engine that delivers 238hp or 247hp. In markets where gasoline engines are preferred, we will also see a 2.3-liter turbocharged gasoline engine producing 298hp. A 10-speed automatic transmission will be standard on engines with 207 hp and above. For others, the options will range from a 5 or 6-speed manual to a 6-speed automatic.

Customers will find two different 4Motion all-wheel drive systems in the new Amarok. The system in question can be chosen at will or can be purchased with permanent all-wheel drive. Cheaper, rear-wheel drive versions of the Amarok will also be sold in some markets.

Production of the next generation Amarok is expected to begin in September at Ford’s Silverton plant in South Africa. Volkswagen will also continue production in Argentina of the first generation model for South American regions. The new generation of Amaroks will go on sale in Turkey in April 2023.


Share by email
titled this send it to your friend.