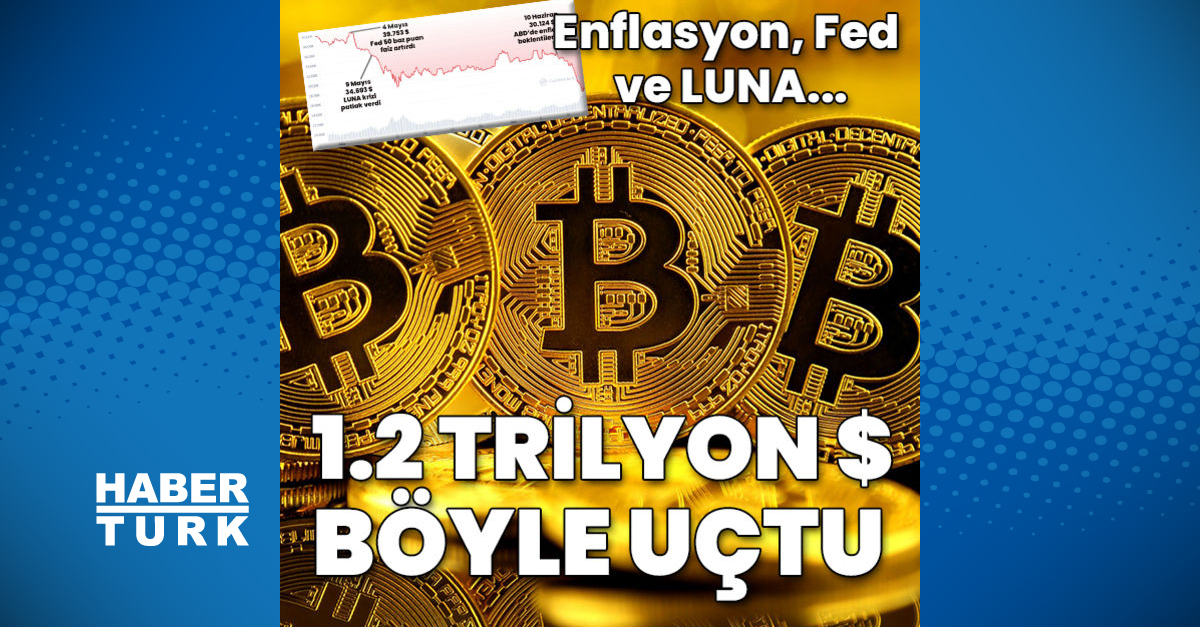 The cryptocurrency selling process, which began last week with higher-than-expected inflation in the US, has turned violent since yesterday.

Bitcoin was hovering above $ 30,000 before U.S. inflation data was released on Friday. With the 8.6 percent annual inflation rate exceeding expectations of 8.3 percent in May, the possibility of a 75 basis point hike in interest rates by the Fed at tomorrow’s meeting has started pricing the markets.

While Bitcoin started the new week at $ 27,400, Monday saw below $ 25,000 in parallel with the decline in equity markets. Yesterday, cryptocurrency financing firm Celsius’ announcement that it had stopped all transactions accelerated the decline of Bitcoin, which was already under selling pressure. At noon yesterday, the daily loss in Bitcoin exceeded 15%.

Celsius is a platform that offers users a loan in exchange for depositing their cryptocurrencies as collateral. Billions of dollars in funds are estimated to get stuck with the disruption of operations.

Although Bitcoin dropped to $ 35,000 on January 22, it managed to rise again to $ 47,000 at the end of March. Starting in April, inflation fears began to grip global markets. After the coronavirus outbreak, while there hasn’t been a full recovery in logistics chains, there has been a sharp rise in food and energy prices with Russia’s attempt to invade Ukraine. This has led to a global rise in consumer prices.

Bitcoin was above $ 42,000 before US inflation data was released on April 12. With the announcement that annual inflation in the country hit its highest level since 1981 at 8.5% in March, a massive sell-off of cryptocurrencies occurred. Bitcoin lost nearly 9% on the day in question, dropping below $ 40,000.

Currently, the Fed raised interest rates for the first time in 3 years in March to fight inflation, raising the official rate by 25 basis points. The fact that inflation exceeded expectations in March raised the expectation that there would be tougher steps by the Fed.

INCREASED BY 50 BASE POINTS

On May 9, the Terra TeraUSD (UST) network stablecoin failed to hold its $ 1 target value and began depreciating rapidly. This led to the collapse of LUNA, the local currency of the Terra network, which was in the top 10 cryptocurrencies at the time. Investors saw $ 60 billion written off in about 1 week.

Testing above $ 32,000 before the FSO crisis erupted, Bitcoin this time dropped below $ 28,000 in 3 days. The 8.3 percent annual inflation rate in the United States on May 11, higher than expected by 8.1 percent, also contributed to the decline.

Bitcoin, which partly overcame the insecurity created by the LUNA crisis in about a week, hovered around the psychological level of $ 30,000 for the remainder of May. Last Friday, as Bitcoin was hovering around $ 30,100, it again sold heavily due to US inflation data. In May it was announced that inflation in the United States hit 8.6%, a new high in 41 years. After these figures, which were above the 8.3 percent expectation, the Fed is expected to raise the rate by 75 basis points at tomorrow’s meeting.

Analysts from Barclays on Friday and Goldman Sachs revised their rate hike expectations at their June meeting yesterday to 75 basis points from 50. Goldman analysts reported that they expect a rate hike of 75 basis points in July.

As a result of these developments, the yield on 10-year Treasury bills in the United States rose to 3.30%, the highest level in nearly 12 years. While rising bond yields triggered a flight from riskier assets, fears that the Fed’s tight tightening measures would push the US economy into recession led to sell-offs in global equity markets and cryptocurrencies. Finally, Morgan Stanley CEO James Gorman said: “It’s possible we will enter a recession. Frankly, that probability is now 50-50 percent.”

With the steep declines experienced yesterday, the total market value of cryptocurrencies fell below $ 1 trillion for the first time since February 2021. Prior to the release of US inflation data on Friday, the total market capitalization of cryptocurrencies was $ 1 trillion 232 billion. To date, this amount has dropped to $ 940 billion. In other words, $ 292 billion was wiped off the market in 4 days.

The loss throughout the year was much tougher. At the start of the year, the total market value of cryptocurrencies was $ 2 trillion 188 billion. In other words, $ 1 trillion 248 billion was wiped off the market in 2022.